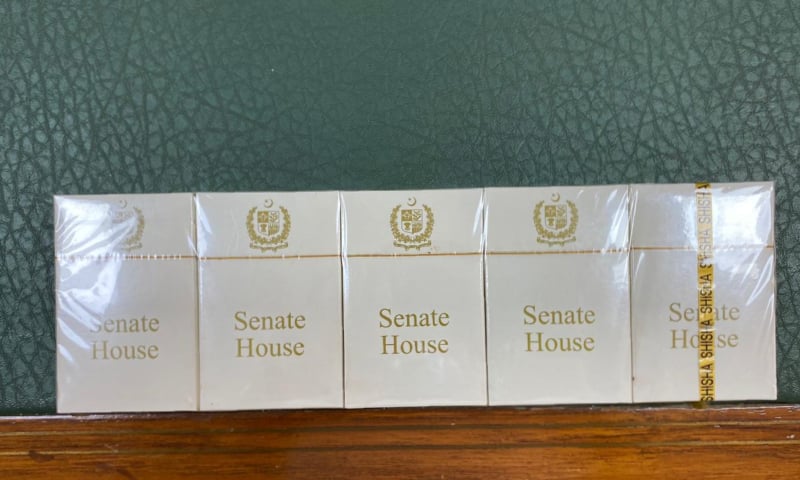 These packets are designed with no health warning and with the “Government of Pakistan” emblem on the top and “Senate House” written below.

In Pakistan, special crested cigarettes are made only pursuant to Federal Excise Rules 2005, Third Schedule of Exemptions. Specific written orders of the competent official authority are required, for the President of Pakistan, President of AJ&K and governors of the provinces.

Packets are special crested for the privileged houses and they comply with the mandated pictorial health warnings issued pursuant to The Cigarettes (Printing of Health Warning) Ordinance 1979. The Prime Minister of Pakistan is also provided through Sections 14(1)(c) and 14(2) of the Prime Minister’s Salary, Allowances and Privileges Act, 1975.

There is no provision in law which permits manufacturing and supply of packs to the Parliament. Furthermore, printing and use of official emblem on these packs clearly violate the provisions of the Pakistan Names & Emblems Act 1957 which includes fine which may extend to Rs500.

Currently, there is a 60 percent pictorial health warning required to be printed on the front and back of the pack with a textual health warning in Urdu (front) and English (back). According to Section 4 of the Printing Ordinance, it is prohibited to even possess a cigarette packet that does not have the mandated health warning, let alone, manufacture, sell or offer for sale.

According to an expert, “Not only has the senator committed an offence under law, his actions have led several other senators, esteemed members of the Senate, knowingly or unknowingly become accomplices to this crime.”

It is therefore established that the senator has violated the law by not printing the mandated health warning on the packets and for offering these to senators who also possess these illegal packs. But the story of the picture of such a pack does not end here.

Furthermore, the senator is also in contravention of the Federal Excise Act 2005 and Federal Excise Rules 2005 in terms of the cigarette packaging requirements. Provision 24A mandates the printing of the retail price, health warning, and the name of the manufacturer before the cigarette packs can be cleared from the manufacturing premises. All packs manufactured and distributed by the senator at the Parliament do not comply with any of the statutory printing requirements and attract the penalties specified in Section 19 that include FED charged @500 per cent ad valorem, confiscation and destruction of machinery and equipment used for manufacturing and the person manufacturing be liable of a fine of Rs100,000, or imprisonment for 5 years, or both above.

The violation of these clauses also includes penalties of imprisonment and fines, putting the manufacturer in a very serious spot. It is also worth checking whether the requisite excise and sales tax has been paid against these packets or not. And if not, how did these manage to leave the factory without the right inspection and levies thereof? The very high likelihood is that the taxes have not been paid because the retail price is not printed on these packets and federal excise duties are collected based on what prices are printed on the cigarette packets as mandated by law.

It does not end here. According to SRO 53(KE)/2009 issued pursuant to Section 7 of the Prohibition of Smoking and Protection of Non-Smokers Health Ordinance 2002, free samples to consumers of tobacco products to promote smoking is not allowed.

As with any law, the penalties here too are prescribed and put our senator and his story further down the rabbit hole. According to Section 11(ii) the penalties are “punishable with fine which may extend to five thousand rupees and in case of second or subsequent offence, shall be punishable with imprisonment which may extend to three months, or with a fine not less than one hundred thousand, or with both.”

Under the same 2002 Ordinance, as per Section 5 “Prohibition of smoking and other uses of tobacco. – No person shall smoke or use tobacco in any place of public work or use”. Parliament is decisively a public place and therefore is completely smoke free. Inciting to smoke within public place attracts Section 11 penalties that include fine which may extend to Rs1,000 and second or all subsequent offence, fine not less than Rs100,000.

Election will not held at Imran’s will: Ahsan...

PML-N, PML-Q at each other’s throats over hospital’s...

Friendly nations fear their aid will go to...

Establishment’s role for rule of law crucial for...