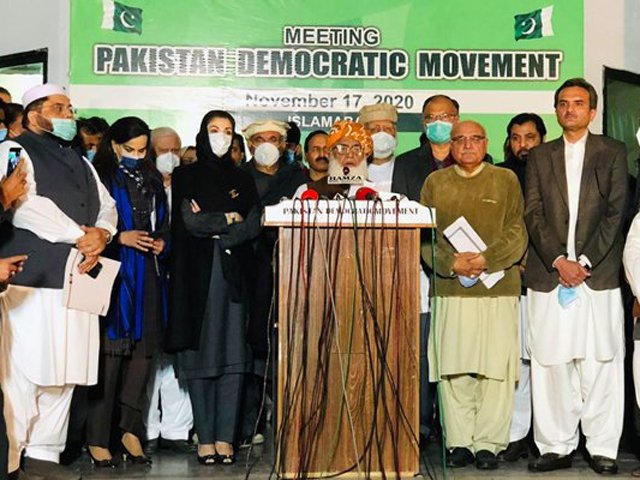 The final and only workable option left with the 11-party opposition alliance – the Pakistan Democratic Movement – to advance their objective of overthrowing the incumbent government is to resign from the assemblies en masse, a senior PML-N leader said, ruling out the possibility of a much talked about PTI-style long march. However, the PDM has not yet made an official statement on the option of holding a long march.

The senior leader, requesting anonymity, told The Express Tribune that after the resignations, the assemblies would become defunct and lose their legitimacy locally as well as globally, which will create a crisis-like situation in the country, forcing the government to resign.

He said that the JUI-F and the PML-N had already agreed on the option of resignations; however, earlier, the PPP was skeptical about it but was forced to give it a serious consideration due to the G-B election results. He said that the matter of resignations was under discussion between PPP Co-chairman Asif Ali Zardari and PML-N supremo Nawaz Sharif.

He said that the PDM would have to announce their next plan of action on December 13 as the movement has to enter into a decisive stage to keep the momentum alive, adding that the “opposition cannot hold rallies anymore”.

He said that the PTI-style long march was not a workable option, adding that if the PDM decided on a long march to Islamabad with just a rally at the end, “what purpose would that serve”. And a sit-in in the federal capital is not possible owing to extreme cold weather there, he added. “Secondly, there is the threat of coronavirus spreading in participants of the sit-in, which would fail the entire exercise very quickly.”

He said that if the PPP did not agree to resign, the PML-N, the JUI-F and other parties would have to consider the option of resigning on their own, allowing the PPP to adopt an independent course.

“If that’s the case, the PDM will have to neutralise the threat that PPP would pose as an independent player.”

A PPP source said that giving resignations would be equivalent to entering a blind alley and the PPP did not believe in such style of politics. “Resigning will create constitutional crises in the country and with so many crises already threatening the country, why would we want to create another one.”

He said that the PDM should keep all the options alive and abstain from politics of confrontation. “Even the PML-N will not resign. They are using this as a pressure tactic.”

PPP Punjab leader Hasan Murtaza said that the PDM will take its decision in the upcoming meeting on December 8. “No such decision has been taken yet. All options, including the long march, sit-ins in all major cities and resignations, are on the table,” he said, adding that the PPP will honour the PDM’s decision irrespective of its position.

PML-N leader Muhammad Zubair, who is also the spokesperson for Sharif and Maryam Nawaz, said that the next plan of action would be mutually decided upon in the upcoming PDM meeting.

Atta Tarar hits out at PTI over vicious...

LG polls in Punjab in last week of...

Elections only solution for a better tomorrow, says...