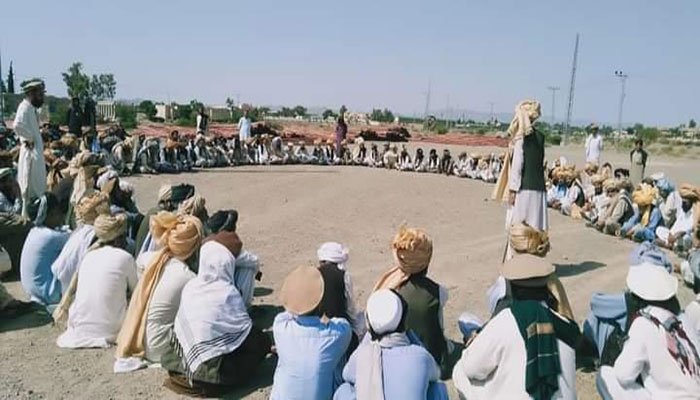 A Grand Jirga of elders of Zalikhel Wazir tribes on Saturday announced to raise 3,000 armed lashkar and threatened to attack police stations if the arrested maliks and elders were not realsed forthwith.

They said that peaceful environment in South Waziristan district was intentionally being sabotaged at the behest of certain elements, which they termed a shameful act on their part. They termed the arrest of elders illegal and asked the district administration and District Police Officer Shaukat Ali to honour their promises and release the elders.

They announced that Zalikhel tribe would raise 3,000 armed lashkar and attack the police stations in Wana, Azam Warsak and Speen if the elders were not released on bail today. The speakers said that district administration, particularly assistant commissioner Wana and DPO would be responsible if any untoward incident occurred.

It may be mentioned that for the first time after the merger of erstwhile Fata into Khyber Pakhtunkhwa province, the police recently arrested 16 prominent elders and maliks of Ahmadzai Wazir tribes and put them in the lock-up for torching an ambulance and firing on a police party.

The DPO had claimed that the maliks and elders were raising lashkar to torch the home of station house officer of Azam Warsak Police Station, as he had registered cases against them for setting an official ambulance on fire and firing on a police party.

He said that cases were registered against the tribal elders and maliks as the armed lashkar of the two tribes had challenged the writ of the government. The DPO warned that strict action would be taken against those challenging the state writ and attacking police or government installations.