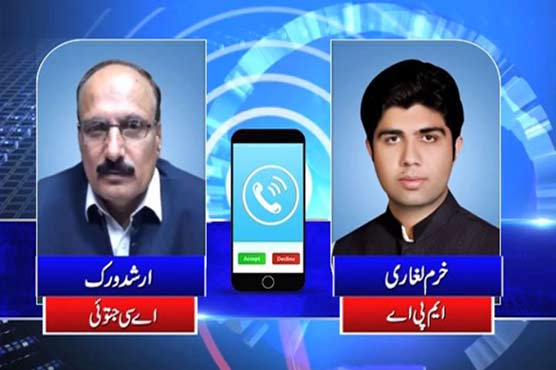 An alleged leaked audio of Pakistan Tehreek-e-Insaf (PTI) lawmaker from Muzaffargarh, Khurram Leghari has surfaced in which he was reprimanding Assistant Commissioner Jatoi Arshad for not facilitating his tour to the Ramazan Bazaar.

As per the audio recording, the PTI MPA angrily asked the AC that he had directed him to arrange a tour to Ramzan bazaar but the police officer turned off his phone.

AC Jatoi told that the battery of his phone had run out and however, now, he can visit the bazaar at any time.

Khurram Leghari responded, “If you want to fight, I am coming. Tell me where I can come.”

This is the second incident regarding Ramzan Bazaar as earlier, Firdous Ashiq Awan had reprimanded Assistant Commissioner Sialkot Sonia Sadaf for failing to control the sale of substandard items in Ramadan bazaars.

Dr Firdous Ashiq Awan paid a special visit to the Ramadan bazaars. Assistant Commissioner Sonia Sadaf and other officials were also present on the occasion. Firdous Ashiq Awan took stern notice of the sale of substandard goods and told AC Sialkot that it was her duty to check the quality of the goods.

The Special Assistant ordered to remove immediately all the poor quality fruits from the shops in Ramadan bazaar.

She said that Ramadan bazaars have been set up by the government, it cannot be given in the hands of such thugs adding that the government is responsible here.

Dr Firdous Awan said that the government is suffering from bureaucratic machinations. If you are an assistant commissioner, you should face the public instead of hiding, she added.