Islamic Art Festival to Wrap Up in Lahore 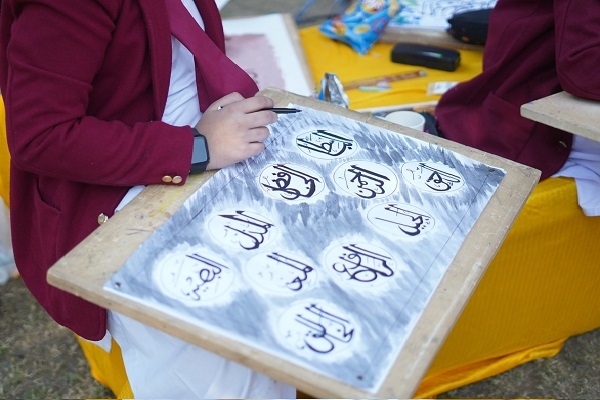 Lahore’s International Islamic Arts Festival is set to wrap up today after four days of activities that drew large number of visitors.

Some thought-provoking sessions, Sufi music, grand participation of school and university students in calligraphy workshops and book and food stalls featured the third day of the International Islamic Arts Festival at Alhamra, The Mall, on Saturday.

Recorded music of Nusrat Fateh Ali Khan’s numbers and other Sufi singers kept the visitors engaged throughout the day. The turnout at the festival was a good on Saturday due to holiday in educational institutions.

The four-day Islamic art festival, being organised by the Lahore Arts Council (LAC) and Pakistan Arts Council of Karachi is continued successfully. On the third day of the festival, various sessions were held in which people who had an interest in the Islamic art participated in large numbers. The seating arrangements were made on the lawns of the Alhamra Art Centre for the visitors.

The third day of the festival started with the a session, titled “Splendors of Muslim Achievements,” in which Tehniyat Majeed from LUMS spoke on the illustrated page with the horoscope of a Timurid prince, Prof. Rafya Tahir from the University of Punjab spoke on The Aesthetics of Mughal Style of Illumination in Quran Manuscripts, Calligraphic Masterpiece, Mass Produced Scripture, Early Quran Printing in Colonial India by Prof Urlik Stark from Chicago University, USA, presented by Shariq Khan and Najia Farhat from the Fatima Jinnah Women University Islamabad spoke on Exploring the Unostentatious: Weaponry and Muslim Miniature Painting.

The second session of the day started with Moderator Attya Sayed and Faiza Noon from Hast-o-Neest Institute of Traditional Art and Studies spoke on Cosmology and Symbolism of Miniature Paintings and retired Lt Gen Humayun Khan Bangash spoke on MEEM– A bouquet of Reverence “Heliya Shareef”.

Sunday is the final Day of festival. Provincial Minister Mohsin Leghari will be the chief guest in the closing ceremony.

Will Imran Khan pull another rabbit from his hat on 26? Shafaqna Exclusive

No one will be allowed to disrupt hard-earned...