Allies throw weight behind PM over appointment of Army Chief 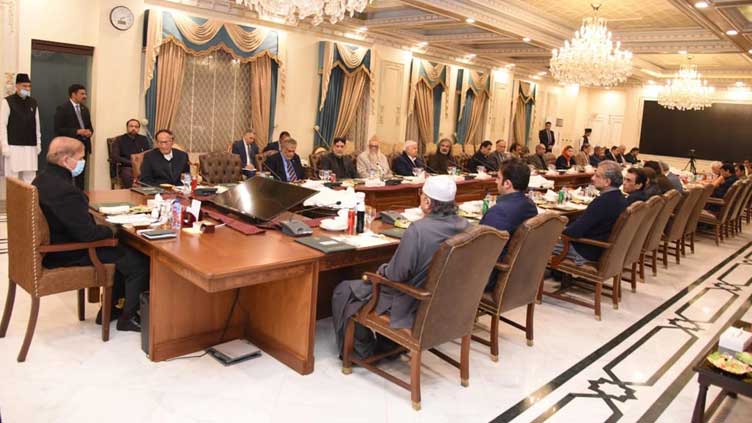 Coalition partners on Wednesday while expressing complete confidence in the leadership of Prime Minister Shehbaz Sharif and said that they will stand by him in every decision.

This was said in a meeting presided over by Prime Minister Shehbaz Sharif regarding the appointment of Army Chief and Chairman Joint Chiefs of Staff.

During the meeting, consultation was held on the appointment of the COAS and the CJCSC, while country s political situation also came under discussion. The prime minister also took the allies in confidence ahead of the Army Chief and forwarding summary to the President.

Sources privy to the development said that during the meeting, former President Asif Ali Zardari said that the constitution has given PM Shehbaz Sharif right and the privilege to appoint the Army Chief.

During the meeting, Chaudhry Shujaat Hussain leader of PML-Q, told the prime minister that it was his constitutional right to make such appointments and they would fully support his decision.

Allah Almighty had bestowed upon him the honour and placed him in such a position, he added.

Aslam Bhootani announced that the prime minister would take the decision under the constitution and they would fully endorse it.

Shahid Khaqan Abbasi, senior PML-N leader and former prime minister, said that it was a matter of pride for them that all the leadership of the coalition parties had expressed complete confidence in the prime minister.

Appointment to be made before PM s Turkiye visit, says Kh Asif

Earlier today, Defence Minister Khawaja Asif said he expected the new army chief to be appointed before Prime Minister Shehbaz Sharif s visit to Turkey on Friday, hours after the premier s office announced that it has received the names of six top generals.

He said the formalities, the procedure laid down in the law would likely take a day. However, he expected that the process would be completed before the prime minister’s scheduled two-day visit to Turkiye on the invitation of Turkish President Tayyip Erdogan.

Army chief Gen Qamar Javed Bajwa, 61, is scheduled to retire on November 29 after a three-year extension. He has ruled out seeking another extension. “The prime minister will leave the day after tomorrow in the evening. So it (the appointment of new army chief) will be settled before then,” Asif said.

The Prime Minister’s Office (PMO) will send the summary to President Arif Alvi who will notify the appointments of the Chief of Army Staff (COAS) and the Chairman Joint Chief of Staff Committee (CJCSC).

Prime Minister Sharif was scheduled to leave for Ankara on a two-day visit on Friday at the invitation of Turkish President Reccip Tayyip Erdogan.

Whatever happened to ethics?