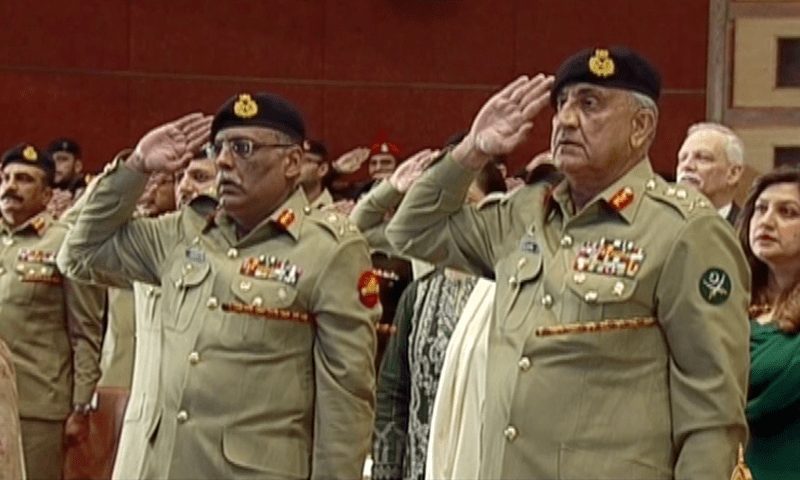 Addressing, as he pointed out himself, the Martyrs Day ceremony for the last time before retiring on November 29, COAS Gen Qamar Javed Bajwa said that the Pakistan Army was not going to interfere in politics any longer.

He was addressing a Defence and Martyrs Day ceremony at GHQ, Rawalpindi on Wednesday, which had been postponed from September 6 in solidarity with the flood victims. His statement came in the light of the sequence of events starting earlier this year, with the moving of a vote of no-confidence against the PTI government, and followed by its ouster, and its building of an anti-Army narrative.

He said that a “false narrative was created”, from which “an escape is now being attempted.” That was a reference to PTI chief Imran Khan’s recent U-turn on the USA, which he had earlier accused of conspiring to oust him.

Calling it ‘unconstitutional’ for the army to have any role in politics, the COAS reiterated that the army has – as an institution – decided that it will no longer interfere in politics and that this is a policy that is here to stay. This is a welcome statement, and something that has now been openly discussed by the top tier of the military over the past few months.

Given the unfortunate history of political interventions in Pakistan by unelected institutions, there will be scepticism over this claim but any institutional effort at depoliticizing itself is a decision that should be welcomed by all political stakeholders – with the hope that this is a policy that continues at an institutional level regardless of who heads it.

Perhaps what will sting the PTI is the army chief’s unequivocal rejection of the ‘foreign conspiracy’ narrative, saying it is inconceivable to think that the country’s armed forces would take any part in an international conspiracy against the country’s government while also pointing to the PTI’s attempt to now ‘escape’ from said allegations.

In clear terms, the COAS also spoke out about the language used in criticizing the armed forces, the message being that criticism may be fine, but unsavoury language and fanciful narrative-building is not. From the Mir Jafar and Mir Sadiq analogies to the distasteful campaign following a military chopper crash a few months ago during flood-relief activities, post the vote of no-confidence there has been a volley of targeted censure against the army by those affiliated with or supporters of the previous government.

While there are misgivings – again, because of Pakistan’s history – it is nonetheless of some relief to hear an army chief encourage the political class towards building a democratic culture. Importantly, the general pointed to the economic crisis the country is facing and emphasized just how much need there is for unity among the political stakeholders at this moment.

Critics will point to the fact that much of the criticism the military faces and the democratic breakdown in the country has been the result of institutional intervention into political matters. This has also been hinted at by the COAS, who underlined the idea that in February last year the military had as an institution decided to completely back off from indulging in the political realm. And that is how it should be in any case.

Our constitution – the grundnorm of the land – has clearly defined every institution’s role and place. Perhaps, as the COAS has promised, it is time to finally go back to a reset of sorts and ensure that all institutions stay within their marked lanes.

In this, there is a lesson also for the political class that needs to stop vying for the blue-eyed spot and learn to respect the democracy it uses with such abandon as a slogan. If that were to happen, we may finally see the end of unnecessary pressure tactics like dharnas to topple governments, or manufactured judicial and political battles, or arbitrary censorship.

Political observers have welcomed Gen Bajwa’s words while also cautioning that a lot depends on what happens next. One hopes that the claimed policy of remaining within constitutional roles continues and that all political parties realize that the country and its future need a framework – decided by political stakeholders on their own – for a way forward.

This would include desisting from asking the new army chief for early elections or pressuring the president to ignore his constitutional role of signing the new chief notification when the PM sends it ahead. The country can neither afford any such misadventures nor further delays in what ideally should have been a simple process of appointing a state official.