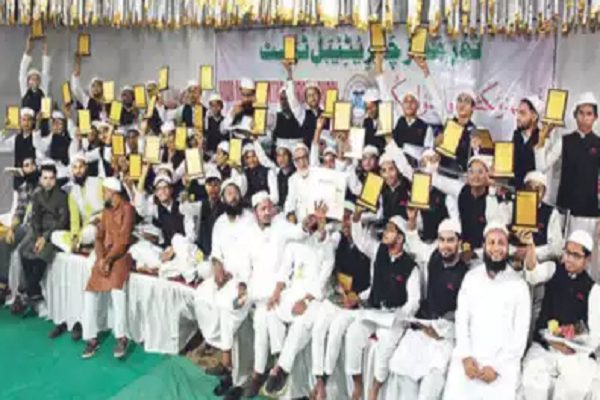 Forty-two hafizs (memorizers of Quran) who have also cleared SSC board exams in the last three years (2020, 2021 and 2022) were honored in a ceremony in Mumbai, India.

The Noor Meher Charitable Trust which runs both a madrassa and a school from the same building in Malad West felicitated them.

Out of the 42 memorizers, 22 had cleared the SSC exams earlier this year.

The Trust’s Noor Meher High School and Madrassa Jamia Tajweedul Quran are a unique experiment started by businessman Syed Ali in 2000. There are separate teams of teachers who coach and prepare the students for both the courses-SSC and hafiz (memorization).

“The distinction between deeni (religious) and dunyawi (worldly) has caused huge damage to the community. I always felt that a hafiz who can memorize the whole Quran can also excel at modern education if the right opportunities are provided. I tried it and results since 2012-2013 (when the first batch passed SSC Board exams) have been encouraging,” said Syed Ali, popularly known as Ali Bhai.

Bandra-based Ali Bhai turned his Malad bungalow into a school and madrassa which attracts students mostly from the low-income groups and first time learners. Many of the hafizs joined mainstream higher education and have secured respectable jobs as college teachers, engineers and managers in companies. SSC certificates work as tickets to more options in life to the hafizs.

Abu Talha Ansari who became a hafiz and also cleared this year’s SSC exams with 83.40% said that he joined this madrassa in 2016. “A relative whose son had earlier studied here told my father about it and I was enrolled here. The seven years I spent here were so enriching. It changed my life,” said Ansari, son of an autorickshaw driver.

Mohammed Dilshan who secured 81.80% in the SSC exam this year comes from Bihar and an uncle had brought him here. “My father died during the pandemic and after a few months my mother too passed away. This madrassa and school have nurtured and sustained me. I want to go for higher studies in data science,” said Dilshan.

Recovering from a crisis