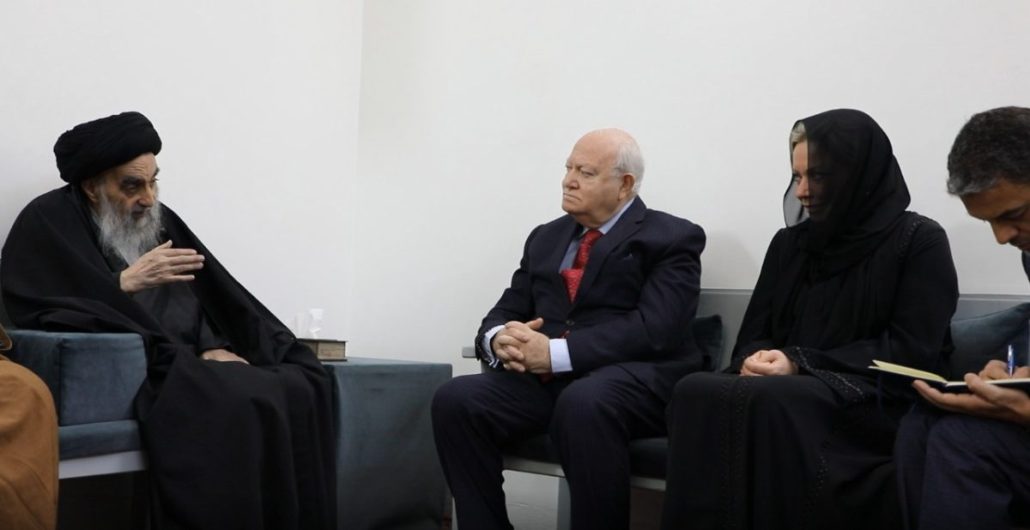 This morning (Wednesday, December 7), Miguel Angel Moratinos, the United Nations Under–Secretary–General and High Representative for the United Nations Alliance of Civilizations met with the Grand Ayatollah Sistani in Najaf Ashraf.

According to Shafaqna, the office of the Grand Ayatollah Sistani published a statement about this meeting. The statement reads:

The High Representative for the United Nations gave some explanations about this plan, the principles based on it and accomplished procedures in this regard. According to this statement, the Grand Ayatollah Sistani, in this meeting, emphasized the importance of redoubled efforts to promote the culture of peaceful coexistence, negation of violence and hatred and establishment of values of solidarity based on paying attention to mutual rights and respect among the followers of various religions and intellectual trends.

Then, the Grand Ayatollah Sistani pointed out: Tragedies that many nations and ethnic and social groups are suffered in several parts of the world- as a result of intellectual and religious repression and suppression of fundamental freedoms and lack of social justice- play a major role in the emergence of some extremist movements. These movements use blind violence against defenseless civilians and attack religious and ancient sites of those that are different from them in terms of thought and belief.

Also, the Grand Ayatollah Sistani stressed the necessity of dealing with background of these banned and condemned phenomena and taking serious action to reach some degree of justice and peace in various communities that are worthy of human dignity- as God wishes and added that this issue will constrict the favorable space for extending extremist thoughts.

In the end, the prominent Marja’ al-Taqlid of Shia praised the attempts of the United Nations in this regard and whished Mr. Moratinos’ success in performing his mission and asked him convey his greetings and regards to Antonio Guterres, Secretary-General of the United Nations.