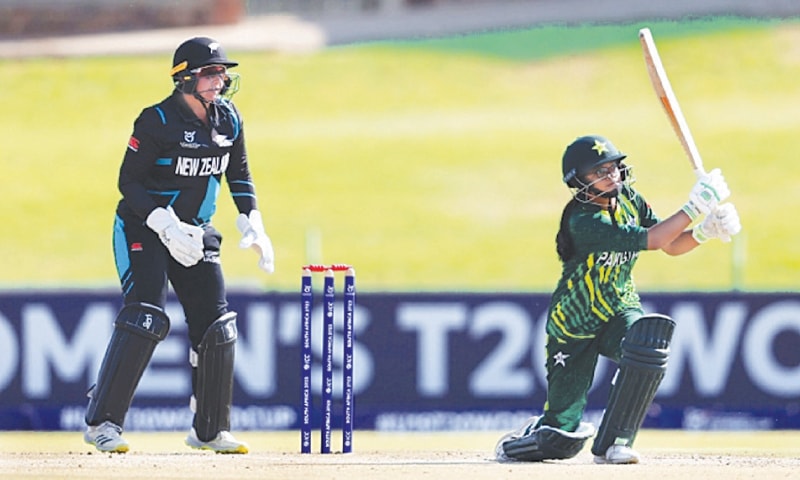 Pakistan journey at the inaugural ICC Women’s U-19 T20 World Cup came to an end when they were beaten by 103 runs by New Zealand by 103 runs in the Super Six stage match on Tuesday.

A target of 179 runs proved too much for Pakistan, who could only manage 75 runs by the end of 20 overs, losing seven wickets during their chase.

Opener Eyman Fatima, who had been exceptional throughout the campaign, and her partner Shawaal Zulfiqar were dismissed for ducks while Warda Yousaf, captain Syed Aroob Shah and Laiba Nasir failed to go past single figures.

Aliza Khan was cleaned up by Tash Wakelin after scoring 11 off 26 before Areesha Noor — Pakistan’s best batter — departed for 24 off 39. Anosha Nasir stayed unbeaten on 11.

With the ball, Anoosha claimed three wickets for 32 runs, extending her tally of wickets in the tournament to 10 in five games. She broke the brisk opening stand between Emma McLeod (32) and Anna Browning (31), who added 47 runs in 29 balls and later dismissed Georgia Plimmer (53) and Paige Loggenberg (0) in the final over of the innings.

Aroob also bowled a sharp spell, giving away just 22 runs in her four overs while outfoxing Wakelin (8) with a googly that rattled the stumps.

New Zealand’s aggressive stroke play yielded a total of 19 fours and two sixes as they raced to 178-7. Plimmer was the standout batter for her side as she continued the rapid start from the openers by scoring a 38-ball 53, studded with five fours.