Speaking to IQNA, Sheikh Ahmed Qattan said the Organization of Islamic Countries (OIC) and Muslim countries ought to make prompt and serious efforts to help the persecuted Muslim minority.

All Muslims and Islamic nations must adopt a unified stance against these tragic events, he said.

Mere condemnation is not going to alleviate the suffering of the oppressed Rohingya, the cleric underlined.

He also deplored worldwide silence over the human catastrophe in Myanmar, urging everyone in the world, regardless of their religious affiliation, to support the Muslim minority.

The United Nations and other international organization are also duty-bound to come to defend the rights of oppressed people like Rohingya Muslims, he said.

Myanmar’s military intensified attacks on Rohingya Muslims on August 25, after dozens of police and border outposts in the western state of Rakhine came under attack by an armed group, which is said to be defending the rights of the Rohingya.

The Muslim community had already been under a military siege in Rakhine since October 2016. The government used a militant attack on border guards back then as the pretext to enforce the lockdown. The Rohingya had already been subject to communal violence by extremist Buddhists for years.

Myanmar’s military is accused of committing atrocities and crimes against Rohingya people, who are considered by the UN as the “most persecuted minority group in the world.” 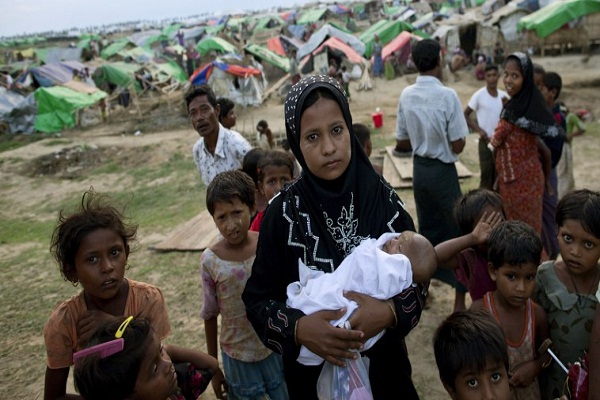 According to a United Nations report published on Monday, a total of 87,000 mostly Rohingya Muslims—including women and children, many with bullet wounds— have arrived in Bangladesh since last month.

In a tweet last Wednesday, Iranian Foreign Minister Mohammad Javad Zarif criticized the global community for remaining silent on the persisting violence against the Rohingya Muslims, calling for “crucial” action to end the acts of aggression against the minority group.

Also, in separate phone conversations on Monday with his Turkish, Malaysian and Indonesian counterparts, Zarif urged Muslim countries to take practical measures to end the inhuman crackdown on the persecuted Rohingya Muslims.

The Iranian top diplomat expressed the Islamic Republic’s deep concern about the sad situation of Rohingya Muslims, saying that Iran was prepared to help adoption of collective strategies by international organizations and Muslim countries in order to solve the ongoing crisis plaguing Myanmar’s Muslim community.

This is what happened to tweeters and online...

HRW: Israeli Pegasus Spyware has been used for...

1659 civilians killed in Afghanistan in first half...

All 18 on board plane missing in Siberia...