The House of Saud will, no doubt, be quite pleased with itself that the Hajj 2017 has concluded without any setbacks or hitches worth reporting.

In fact, it will pat itself on the back rather cynically that in addition to a smooth, incident-free pilgrimage, its enormous team of bureaucrats — including intelligence and security forces — ensured that the compartmentalisation of the Hajj as a purely spiritual-religious ritual did not stray onto “other” areas, the “other” being politics.

Saudi Arabia has for the past four decades, especially following Iran’s 1979 Islamic Revolution which toppled the Shah from power, clamped down on anyone deviating from its interpretation and practice of the Hajj, the pilgrimage that is one of the pillars of Islam. The emptying of the rituals of any socio-political significance, underwritten by state-sponsored court Ulema (scholars), has characterised the nervousness of the ruling family.

On guard to prevent any threat to its rule, the Saudi regime has not only barred millions of pilgrims from discussing or planning campaigns intended to seek and secure justice for oppressed people, but it has also adopted a tougher stance against its own citizens.

To question the House of Saud’s peculiar view of Islam is, literally, to court arrest, detention and death. Hundreds, if not thousands, of dissidents languish in Saudi dungeons for having displayed courageous opposition. The bulk of the dissidents’ disquiet centres on the abuse of power by the unelected “royalty”. Their “crime” is to demand accountability, human rights, freedom and justice.

However, oblivious to the legitimate concerns of the population, the Saudi monarchy continues to behave as all rogue regimes do; it’s a luxury that it can afford, knowing that America has its back. The same can be said of Israel’s secret security arrangements which allow the Saudi royal family to put into practice its questionable policies.

With social media buzzing with photos and selfies of pilgrims, I wonder whether it ever dawned on them how ironic it was to be stoning symbolic devils at the culmination of the pilgrimage while the self-proclaimed “Custodians of the Two Holy Mosques” have been stoning Yemen with high explosives.

The same can be said about Israel’s continued occupation of Palestine, given that the ridiculous demands made on Qatar by the Saudi-led siege in respect of their smaller neighbour’s support and aid for the Palestinian resistance are shocking.

Likewise, the merciless repression of Muslim Rohingya by the government of Myanmar, which has been ongoing since the 1980s, but is currently reaching genocidal levels. This too has apparently been swept under the carpet and is off-limits for the pilgrims to even consider. While the rest of the world watches news coverage from the former Burma with horror, in Saudi Arabia the Rohingya matter not a jot.

The Gulf Cooperation Council (GCC), a conglomeration of oligarchs, set up as a security institution ostensibly to counter Iran’s footprint in the region, has acquired a hallowed status outstripping the sanctity of the noble sanctuaries in Makkah, Madinah and Jerusalem. The kingpins of the GCC are Saudi Arabia, the UAE, Bahrain and Kuwait.

All are led by unelected despots who regard Israel as a guarantor of their freedom to suppress human rights, and are thus unable to issue the slightest squeak in defence of Palestine. If by any chance they do manage to do something, it is generally no more than a knee-jerk reaction, safe in the knowledge that Israel allows them the space to bluff themselves and their faithful sycophants around the world.

Spending billions of dollars on sophisticated military hardware but remaining unmoved in the face of the catastrophic ethnic cleansing of the Rohingya — and the 70 years of Israel’s colonisation and occupation of Palestine — is shameful. Yet these weapons of mass destruction continue to be deployed to destroy Yemen and kill its people.

If the Hajj remains an empty ritual as designed and imposed forcefully by the Saudi regime, neither the Yemenis nor the Rohingya should have any hope that the millions of pilgrims from around the world will be able to mobilise in defence of their rights.

If nothing else, the Hajj presents an opportunity for the prayers of the pilgrims to be concentrated on all oppressed people, no matter where they might be, the Yemenis and Rohingya included. That opportunity is being wasted because the Saudi authorities want to have all of the trappings of global Muslim leadership with none of the responsibilities. It is a truly shameful situation. 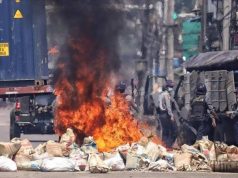 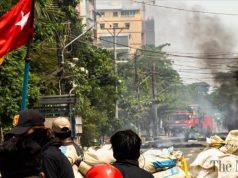 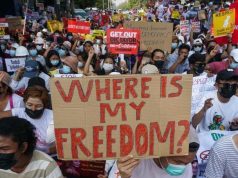 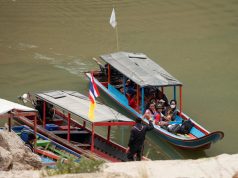 India may face heat of US sanctions on Myanmar 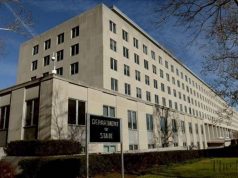 US orders diplomats to leave Myanmar amid crackdown 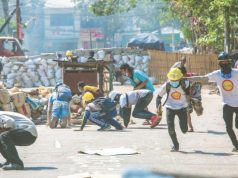 9 more killed in Myanmar as troops fire at protesters