Speaking to reporters today, Pakistani Prime Minister Khaqan Abbasi said his country remains interested in joint operations with the US to resolve disputes over the Afghan War. President Trump, however, has not sent any list of demands on the matter.

In his August 21 speech on the Afghan War, President Trump singled out Pakistan for criticism, accusing them of providing safe zones for terrorism, and that they aren’t doing enough to support America’s war. The implication seemed to be that the US was demanding Pakistan take certain actions to placate them.

Pakistani officials have been complaining since that Trump’s allegations were false. With no specific demands, it gives the appearance that the US isn’t seeking any action from Pakistan, but rather just wants to keep them as a scapegoat.

Abbasi says Pakistan is willing to take a number of steps over the matter, so long as the US also takes reciprocal steps in Afghanistan, meant to limit cross-border attacks on both sides. They have noted that Pakistan has faced a lot of cross-border violence from Afghanistan since the 2001 US invasion. 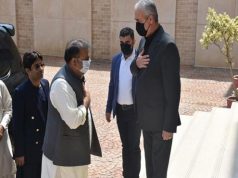