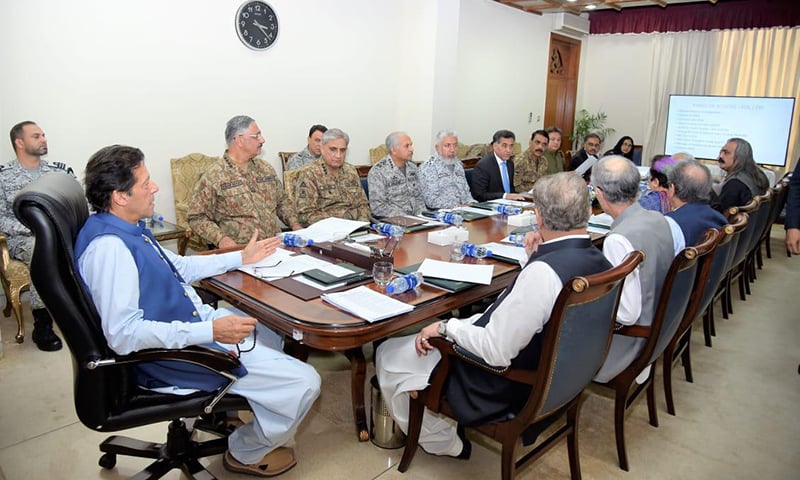 The top security body’s meeting, presided over by Prime Minister Imran Khan, was held in the aftermath of India’s “unilateral and illegal actions” through which it scrapped the special status for occupied Kashmir. The situation inside occupied Jammu and Kashmir and along the Line of Control was also discussed.

The meeting also decided to review Pakistan’s bilateral arrangements with India, take the matter of revocation of Kashmir’s special status to the United Nations, including its Security Council, and observe the upcoming Independence Day on August 14 “in solidarity with brave Kashmiris and their just struggle for their right of self-determination”.

August 15, the Indian independence day, will be observed as “Black Day”.

PM directed that all diplomatic channels be activated to expose brutal Indian racist regime, design and human rights violations,” a statement issued after the meeting said.

Editorial: India is playing with fire

The premier directed the armed forces to continue their vigilance.

The meeting attended by the top civilian and military leadership also decided to recall Pakistan’s ambassador from New Delhi and expel the Indian envoy.

“Our ambassadors will no longer be in New Delhi and their counterparts here will also be sent back,” Foreign Minister Shah Mahmood Qureshi told ARY News.

India strips Kashmir of special rights
On Monday, the government of Indian Prime Minister Narendra Modi stripped Kashmiris of the special autonomy they had for seven decades through a rushed presidential order. An indefinite curfew — that has entered its fourth day today — was imposed in occupied Kashmir and elected leaders were put under house arrest.

By repealing Article 370 of the constitution, people from the rest of India will now have the right to acquire property in Kashmir and settle there permanently. Kashmiris as well as critics of India’s Hindu nationalist-led government see the move as an attempt to dilute the demographics of Muslim-majority Kashmir with Hindu settlers.

Furthermore, Indian Home Minister Amit Shah, who is also president of the BJP, moved a bill — passed by the Indian parliament — to bifurcate the state into two union territories to be directly ruled by New Delhi.

Pakistan had strongly condemned the move and vowed to “exercise all possible options to counter the illegal steps” taken by India.

On Tuesday, Prime Minister Imran expressed his resolve to fight the issue “on every forum” and demanded the international community to take action, accusing Modi of having an anti-Muslim agenda.

The Pakistan Army also said it “firmly stands” with Kashmiris.

Prime Minister Imran constituted a seven-member committee to make recommendations to formulate Islamabad’s legal, political and diplomatic response to the change in the status of occupied Kashmir by the Indian government.