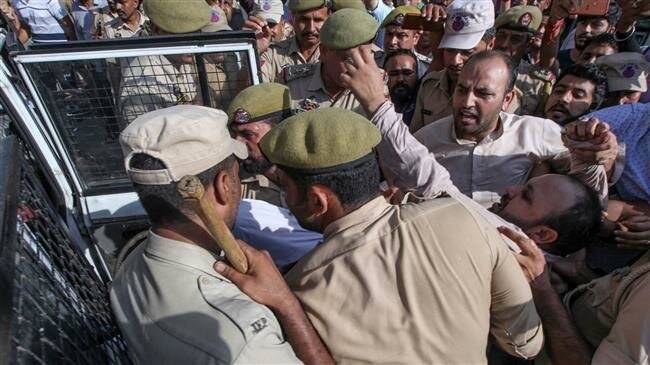 Shafaqna Pakistan:Chairman of the Chiefs of Staff of the Iranian Armed Forces Major General Mohammad Baqeri has expressed concern over tensions in the Indian-controlled Kashmir, warning that military approaches will further escalate the situation in the Himalayan district.

“It is expected that both sides (Pakistan and India) abstain from any hasty decision about the fate of the region that would not take the people’s will into account,” Baqeri said in a telephone conversation with Chief of Army Staff of the Pakistan Army General Qamar Javed Bajwa on Saturday.

“We hope that political efforts will restore the basic rights of the region’s Muslims,” he added, emphasizing that Muslim nations were concerned about the developments in the disputed region.

Baqeri also stressed the need for restraint in order to manage Kashmir developments.

The Iranian and Pakistani military officials then exchanged viewpoints on border security, military and security relations between Tehran and Islamabad and latest regional developments, particularly the situation in Kashmir.

Bajwa, for his part, praised Iran’s concern for Muslims, saying that Pakistan will spare no efforts to secure its frontiers with Iran, so the borders will be the boundaries of peace, friendship and serenity for both the Pakistani and Iranian nations.

The Indian government decided on Monday to strip Kashmir of its special constitutional status.

A presidential decree revoked Article 370 of India’s constitution, which guaranteed special rights to the Muslim-majority Kashmir region, including the right to its own constitution and autonomy to make laws on all matters, except defense, communications and foreign affairs.

India dispatched thousands of additional troops to the region in the wake of the move, declaring a strict curfew, shutting down telecommunications and internet, and arresting political leaders as well as pro-independence campaigners.

Khan said the move was in breach of international law, adding that he feared ethnic cleansing by India.

About 8,000 supporters of the Pakistani religious party Jamaat-e-Islami staged a demonstration in Islamabad on Friday to denounce New Delhi’s move.

Authorities reportedly deployed about 2,000 police and security forces, and did not allow the protesters to approach the Indian Embassy.

India regularly accuses Pakistan of arming and training militants and allowing them across the frontier. Pakistan strongly rejects the accusation.

Indo-Pakistani relations nosedived in February when over 40 Indian paramilitaries were killed in a bomb attack in Kashmir. New Delhi blamed Pakistan-based militants, but Islamabad denied any involvement.

The Independent’s multi-award-winning Middle East correspondent, Robert Fisk, recently wrote in an article that Israel was playing a big role in India’s escalating conflict with Pakistan.