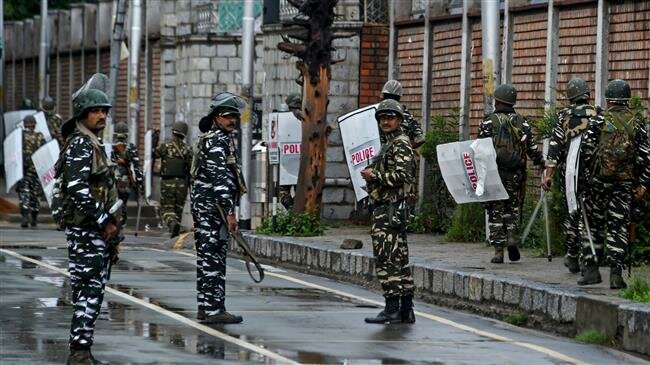 Shafaqna Pakistan:Pakistan has called on the international community, including Iran, to help find a peaceful solution to Kashmir conflict amid a fresh wave of tensions between New Delhi and Islamabad over the disputed region.

Qaiser expressed hope that Iran would employ all its regional and international capacities to help ease tensions in Kashmir.

He described the Islamic Republic as a friendly and brotherly country of Pakistan, saying Islamabad considers Tehran a key party for consultation and interaction in tough times.

Larijani, for his part, said the Kashmir issue needs to be resolved through diplomatic approaches.

Stating that Iran is closely monitoring developments in Kashmir, he underlined the necessity for the resolution of the dispute based on UN resolutions.

On Saturday, Chairman of the Chiefs of Staff of the Iranian Armed Forces Major General Mohammad Baqeri warned that military approaches would further escalate the situation in Kashmir.

Speaking on the phone with Chief of Army Staff of the Pakistan Army General Qamar Javed Bajwa, Baqeri stressed the need for restraint in Kashmir.

Earlier on Wednesday, Iran’s Foreign Ministry spokesman Abbas Moussavi said Tehran was “closely following up on” New Delhi’s latest decision regarding India-controlled Kashmir as well as the statements of both Indian and Pakistani officials on the developments unfolding in the disputed region.

Tensions have been running high in Kashmir since Monday, when New Delhi revoked Article 370, a constitutional provision that had come into effect in 1949 and grants special status to Kashmir, allowing it to have its own flag and constitution, among other rights.

In the lead-up to the move, India sent thousands of additional troops to the disputed region, imposing a curfew on parts of it, arrested political leaders and shut down telecommunication lines.

Kashmir has been split between India and Pakistan since partition in 1947. Both countries claim all of Kashmir and have fought three wars over the territory.

Islamabad was quick to denounce India’s recent move as illegal, with Prime Minister Imran Khan saying he was weighing taking the matter to the United Nations Security Council

Pakistan says will go to UNSC with China support

Pakistani Foreign Minister Shah Mehmood Qureshi, who is in China, told reports on Saturday that Islamabad would go to the UN Security Council with China’s support with a motion to condemn India for its decision to strip its portion of the Kashmir region of special status.

“I have shared with China that the Pakistan government has decided to take this issue to [the] UN Security Council. We will be needing China’s help there,” he said.

“China has assured full support to Pakistan,” he added.

Qureshi also said that he planned to approach Indonesia and Poland, both non-permanent members of the 15-strong Security Council, for their support.

Pakistan on Wednesday expelled the Indian envoy in Islamabad and announced a five-point plan that included downgrading its ties with New Delhi and suspension of bilateral trade.