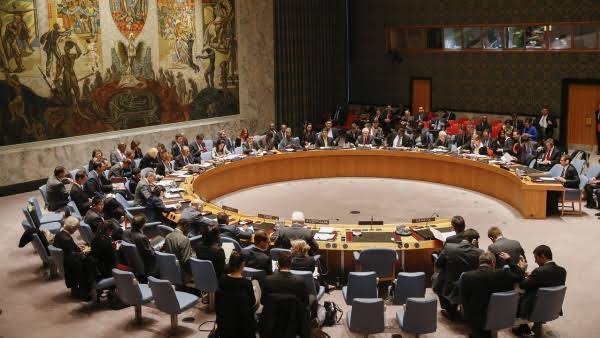 Shafaqna Pakistan: The UN Security Council is taking up the Kashmir crisis for the first time in the last 50 years today .

In the following passage, we will try to understand the positions being taken up by the permanent members of the Security Council on the exploding human rights crisis unfolding in the Indian Held Kashmir (IHK), international media reported on Thursday.

On August 13, Pakistan’s Foreign Minister Shah Mahmood Qureshi in his letter addressed to the president of the UN Security Council had sought convening of the Security Council session over the Kashmir crisis.

Poland is heading the rotating presidency of the UN Council for August. Qureshi discussed the issue with his Polish counterpart Jacek Czaputowicz on August 12 and sought his cooperation for holding the UN Council session. The taking up of the Kashmir issue at the Security Council is a rare event already being termed a success by the Pakistan media.

The Security Council is meeting on Friday (today). According to the Voice of America, the UN council’s president Polish Ambassador Joanna Wronecka has confirmed the Security Council members of holding today a closed-door session to discuss the Kashmir conflict.

Russian news agency Tass also quoted sources as confirming the Security Council would take up the Kashmir issue in its closed door consultative session on Friday. According to Tass, China, being a permanent member of Security Council, backed Pakistan’s request for the urgent meeting of the UN Council on Thursday or Friday to discuss the Kashmir crisis. The UNSC has listed discussion to be held at 1400 GMT or 10am Friday. Friday’s discussion is closed door consultation and not a full-fledged meeting.

Which direction would the SC members go?

There are five permanent members of the UN Council including China, England, Russia, the United States and France while 10 non-permanent members are elected for a two-year term. The latter include Germany, Belgium, Poland, Indonesia, Ivory Coast, Dominican Republic, Peru and South Africa.

America: President Trump in his meeting with Prime Minister Imran Khan had offered mediation over the Kashmir issue. India as always rejected the third party mediation. The US expressed “concern over the emergent situation in Kashmir but also termed it an “internal affair” of India.”

Russia: Tass reported on Thursday that Russia has “not objected” to the Kashmir conflict being raised at the Security Council. The Chargé d’Affaires of the Russian Federation, Dmitry Polyanskiy, said Kashmir issue has not come up for discussion in the Security Council for over a long time and the members must hold consultations over their respective stances. The session, Polyanskiy said must be held in closed door.

Earlier, Russia had termed the Indian contentious move as “in line with its constitution.” In post Pulwama February crisis in the Subcontinent, Russia had offered mediation which was rejected by New Delhi. On August 13, Russian Foreign Minister Sergei Lavrov in his telephonic conversation with his Pakistan’s counterpart had “emphasized on reducing tensions between the two countries.”

China: It fully backed Pakistan’s request for raising the issue at the Security Council and it is due to Beijing’s support that after almost half a century, the conflict would be discussed by the members.

China has expressed strong reservations over the impact of the Indian revocation of Kashmir’s special status on Ladakh. Beijing had termed conversion of Jammu, Kashmir and Ladakh as Indian union territories as an attempt to “harm China’s sovereignty and territorial integrity.”

Prime Minister’s announcement. Qureshi said China backed Islamabad’s position on the emerging crisis and had pledged to support the issue being raised at the Security Council.

This was followed by Beijing dash by the Indian Foreign Minister S Jaishankar who tried to convince Bejing over its position. New Delhi claimed the meeting discussed strengthening of bilateral relations.

Britain: It has the sole distinction of being the colonial ruler of undivided India and hence a party to the Kashmir conflict from its origins. It is also a permanent members of the Security Council. The British Foreign Secretary, Dominic Raab, expressed his “concern” over the Indian annexation of occupied Kashmir with his Indian counterpart on the very next day of the New Delhi’s move by the presidential decree. But Raab also said that they are reviewing the step from New Delhi’s perspective also Prime Minister Imran Khan phoned British Prime Minister Boris Johnson on August 10 and discussed the emergent crisis in Kashmir. The British Foreign and Commonwealth Office in its statement described the telephonic conversation of the two leaders as “emphasizing resolving the issue diplomatically.”

France: France is the only permanent member the UN Council that has not expressed any reaction over Indian revocation.