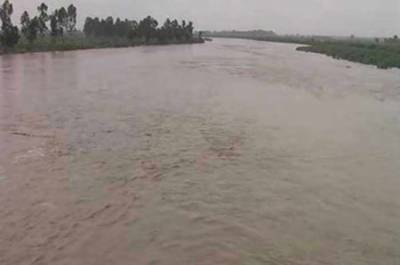 Shafaqna Pakistan:India has released about 200,000 cusecs water into the River Sutlej without any intimation, which has caused flood-like situation in Pakistani river system.

According to Spokesperson for National Disaster Management Authority Brigadier Mukhtar Ahmed, a flood relay coming from Indian Punjab in the Sutlej River can enter Pakistan at any time this afternoon.

The Spokesperson said all federal and provincial bodies, including forces, are ready to cope with any untoward situation.

The administrations of Kasur and other districts located at the bank of the River Sutlej have been advised to take necessary measures to tackle any emergency situation.

Meanwhile, Punjab Minister for Population Welfare Muhammad Hashim Dogar along with Commissioner Lahore Division Muhammad Asif Bilal Lodhi visited the areas in Kasur district, which can be affected by the flood water .