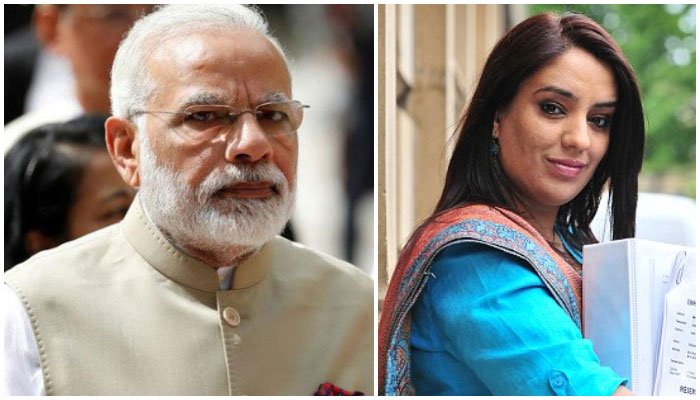 Shafaqna Pakistan:Labour Party parliamentarian Naz Shah has said that Indian Prime Minister Narendra Modi is involved in crimes against humanity and does not deserve the highest civilian award that the United Arab Emirates government plans to give him.

It was reported that the UAE would give the Order of Zayed, the highest civilian award of the country, to Modi when he visits the country next week.

Writing to Sheikh Mohamed bin Zayed, Crown Prince of Abu Dhabi and Deputy Supreme Commander of the UAE Armed Force, the Labour MP from Bradford said that Prime Minister Modi was illegally removing the sovereignty of the Kashmiri people in Indian occupied Kashmir through the forced removal of article 370 and 35A.

Naz Shah MP said in the letter to the UAE ruler: “It saddened me greatly, after returning from the holy pilgrimage of Hajj, to see the news that Modi, once recognised as the butcher of Gujarat being offered the UAE’s highest civilian honour. A title in the name of your founding father Shaykh Zayed. Shaykh Zayed was a man of great honour; a figure who is remembered in the annals of history as exemplifying decent, charity, and support for oppressed peoples. May God have mercy upon his soul. To grant such recognition to an individual who is oppressing the Kashmiri people in the name of Shaykh Zayed, not only questions the value of this previously prestigious title, misrepresents his legacy, but also forces the world to debate the nature or your moral conscious.

“I ask you to question this decision and reconsider giving such an award, not only because the majority of the Kashmiri people share the same faith as you, but because we have a duty as human beings to stand up against the disregard of human rights and evil.

“If your trade deals prevent you from making a stand, or even speaking up on behalf of the Kashmiri people – at the very least, as a representative of the people of UAE, remain silent and condemn the actions of Prime Minister Modi within your heart. For the people of Kashmir, I ask that you at least show this recognition, rather than celebrating and endorsing an oppressor, while the cries of the oppressed are blocked out.”

She wrote that Modi had made Kashmir the most militarised region in the world. Modi has placed the people of occupied Jammu and Kashmir into a complete lockdown for the last 15 days, with the shutdown of telecommunications, internet and other sources of communications. There have been reports of political leaders living under house arrest, political activists injured with pellet guns, curfews, and a maze of razor wire that was locking the capital’s population into an open prison.

After being on a five-day fact-finding mission in occupied Kashmir, Secretary of the All India Progressive Women’s Association, Kavita Krishnan, described the region as being under a military siege and stated, “Frankly, it looked like occupied Iraq or occupied Palestine.”

Naz Shah told Sheikh Mohamed bin Zayed in the letter that the actions of the Indian government have thrown ordinary people’s lives into turmoil, subjecting them to unnecessary pain and distress on top of the years of human rights violations they have already endured.