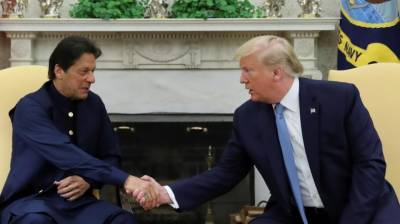 Shafaqna Pakistan: Pakistan has demanded the Trump administration to play a neutral role regarding the Kashmir conflict for helping the release of three US hostages in Afghanistan.

The US President made a telephone call to Prime Minister Imran Khan a few days ago and stressed Islamabad to play its role in getting the hostages released.

Well-placed sources confided to Daily Pakistan that the US President got in touch with Pakistan’s premier while he was at his Bani Gala residence.

Since the US President wanted an official secret call, he requested Prime Minister Khan to make the contact on the official number of the PM Office following which Imran Khan rushed to the PM House and had a conversation with Trump.

In his discussions, the US President said that the Taliban had held hostage the American envoys in a hilly area near Kabul, emphasizing the need for their early release.

Sources disclosed that the Afghan peace Process can also be suspended owing to the issue of American hostages. They say Pakistan’s Prime Minister assured Trump that measures would be taken in this regard.

As Trump brought up the issue of hostages, Premier Imran Khan diverted the attention of US President towards the Kashmir crisis.

Sources said Imran Khan highlighted, in point-blank remarks, that Pakistan was a nuclear country and a desire for peace should not be taken as its weakness.

Imran Khan told Trump that Islamabad was not desirous of initiating any war, however, if India continues to execute its nefarious designs, Pakistan would be compelled to take extreme measures.

To this, Trump shared that he had earlier offered to act as a mediator between the two countries on the issue of Kashmir, assuring that the US would play its role to ensure regional peace.

It is also being rumored that after the discussions with US president, Prime Minister Imran Khan directed constitution of a five-member delegation which would head to Afghanistan for negotiations with the Taliban to secure the release of US officials.

In his official visit to the US , Prime Minister Imran Khan had assured that the hostages would be released soon, falling short of giving a timeline in this regard.