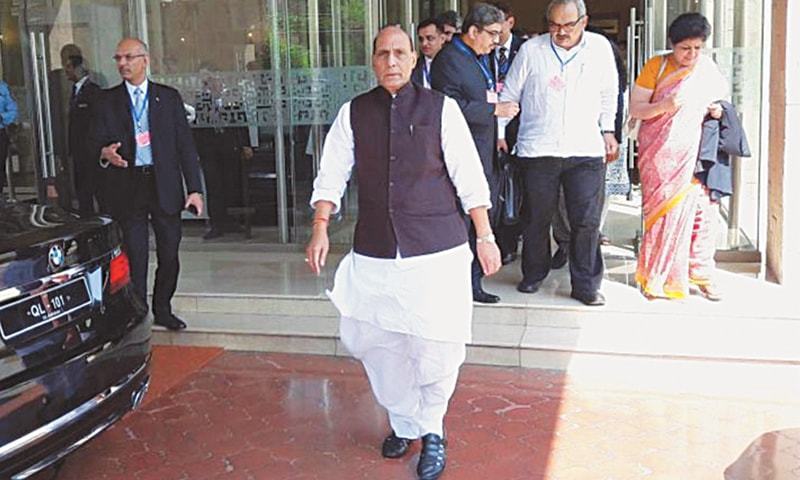 Shafaqna Pakistan: The spe­c­ter of nuclear war haunts tensions between India and Pakistan, and the disputed territory of Kashmir could provide the spark that lights South Asia’s nuclear fuse,” warns a report published by a US think-tank on Saturday.

The report — by Stratfor, a geopolitical intelligence platform based in Austin, Texas — also disputes the classification of the Kashmir issue as India’s “internal affair” or a “bilateral” issue between India and Pakistan.

“It isn’t. A potential nuc­lear conflagration cannot be anything other than a matter of international peace and security,” the report warns.

According to the report, the possibility of “the conflict going nuclear may have increased on Aug 16”, when Indian Defence Minister Rajnath Singh seemed to abandon India’s “no first use” doctrine. Mr Singh tweeted that “India has strictly adhered to this doctrine. What happens in the future depends on the circumstances”. And “the circumstances are not hopeful”, the report adds.

The report points out that during a recent visit to the occupied valley, correspondents for The New York Timesmet a herdsman beside his flock in the Kashmiri capital, Srinagar. As a car carrying a reporter slowed down to approach him, the herdsman sprang up and jogged to the window. “We are ready to pick up guns,” he said, unprompted.

The report argues that with passions again running high in Kashmir, the stakes for the region and the world could not be higher.

“Decades ago, the people of Kashmir were promised a plebiscite that never took place. Will they ever be asked what they want?” the report asks.

It claims that both Indian and Pakistani armed forces possess both strategic and tactical nuclear weapons, which local commanders could use on the battlefield in populated areas.

“This would be the first use in war of atomic weapons since the US destruction of Hiroshima and Nagasaki in 1945,” the report adds.

It points out that last Feb­ruary, Pakistan downed an Indian fighter jet but retur­ned its pilot, Abhinandan Varthaman, on March 1.

Indian PM Narendra Modi “did not acknowledge” Islamabad’s conciliatory gesture. “Nor has his government been willing to discuss Kashmir,” whose people were promised a plebiscite on their future by India’s first prime minister, Jawaharlal Nehru, in 1947.

Giving a historical perspective of the Kashmir conflict, the report adds that the promised vote never took place, but several wars have.