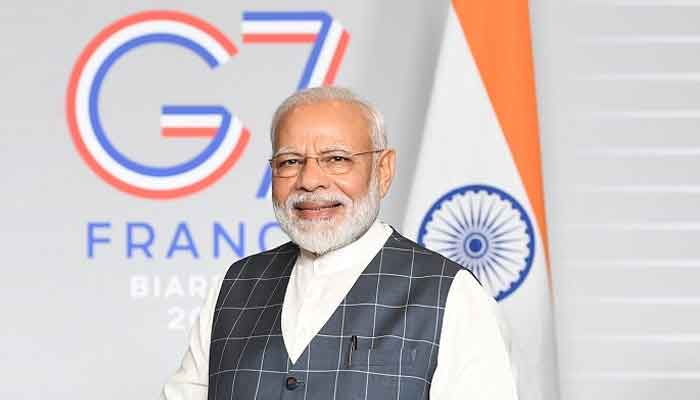 Indian Prime Minister Narendra Modi will be facing tough questions with regard to the worst human rights situation in the Indian Held Kashmir (IHK) and its regional implications on the sidelines of G-7 Summit today.

The Group of Seven (G7) is an international intergovernmental economic grouping of countries consisting of the seven largest International Monetary Fund (IMF)-described large economies consisting of Canada, France, Germany, Italy, Japan, the United Kingdom, and the United States. Modi arrived in France on Sunday to attend the G7 Summit. Although, India is not a member of the G-7 grouping, Modi has been personally invited by French President Emmanuel Macron. At the summit, Modi is expected to speak on the issue of environment, oceans, climate and digital transformation.

“The prime minister reached Biarritz in France, where he will take part in G-7 Summit. In addition to the multilateral components of the summit, he would also be meeting world leaders in separate bilateral interactions,” said the Indian Prime Minister’s Office in a tweet.

Modi is expected to meet Trump at 3.45pm IST on Monday (today). The meeting is expected to continue for 45 minutes and end at 4.30pm IST. US President Trump landed here on Saturday afternoon for the summit and the American officials have made it clear that Kashmir will be on the table when Modi meets him.

His officials have now said that Trump is “ready to assist”, instead of “ready to mediate”. “The United States is watching the situation in Kashmir very closely. We’re continuing to call for calm and restraint, including on rhetoric. But we note the broader implications of the developments in Jammu and Kashmir, and the potential for increased stability in the region. So the president is very focused on this situation, these issues.

And he has indicated that he is ready to assist if both sides are interested in helping to reduce their tensions,” a senior US administration official said.

“Trump would want to hear from Prime Minister Modi on how he plans to reduce regional tensions and uphold respect for human rights for Kashmir, as part of India’s role as the world’s largest democracy,” a senior US administration official said, ahead of the G-7 summit.

The US official said, “We do expect the issue of India-Pakistan relations to come up. India’s decision to rescind Article 370 in Kashmir is an internal decision, but certainly with regional implications.

And President Trump will likely want to hear how Prime Minister Modi intends to calm regional tensions in light of this significant move.” These comments were made in a background briefing in Washington DC and released on Saturday morning.

“The President is likely to stress the need for dialogue among all sides of the conflict and his hope that India will lift the communications and movement restrictions in Kashmir and exercise utmost restraint in dealing with potential protests.

And certainly, President Trump is also calling on Pakistan to prevent the infiltration of militants across the Line of Control that divides Kashmir and to crack down on groups on its territory that have attacked India in the past,” the official said.

Tensions between India and Pakistan spiked after India abrogated provisions of Article 370 of the Constitution to withdraw Jammu and Kashmir’s special status and bifurcated it into two Union Territories, evoking strong reactions from Pakistan.

India has categorically told the international community that the scrapping of Article 370 of the Constitution to revoke the special status of Jammu and Kashmir was an internal matter.

Modi is also expected to meet the new British Prime Minister Boris Johnson. The two leaders spoke on phone earlier this week and agreed on the importance of working together to tackle climate change and other threats to biodiversity.