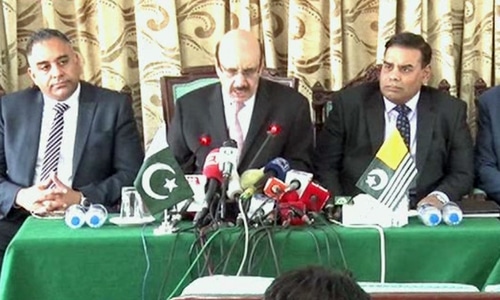 Shafaqna Pakistan: British Member of Parliament Barrister Imran Hussain on Tuesday said that while the meeting held by the United Nations Security Council (UNSC) on the Kashmir issue earlier this month was a “welcome” development, the council still had a role to play to take the dispute to its logical end.

“The fact that this issue was taken up by the UNSC after 50 years is a huge thing […] but I want to register concern because I believe that the Security Council should have gone further,” Barrister Hussain said in a joint press conference with Azad Jammu and Kashmir (AJK) President Masood Khan and British MP Khalid Mahmood.

There should have been an agreed statement of condemnation which was not issued due to some reasons. While we welcome [the session,] I believe that the Security Council still has a role to play, the international community has a role to play and we will continue to push for that in the British parliament.”

Barrister Hussain said the United Kingdom’s parliamentary delegation had arrived in Pakistan on an official invitation from National Assembly Speaker Asad Qaiser. He said that the delegation had met President Arif Alvi and received briefings from the Foreign Office earlier today. The delegation will also meet Prime Minister Imran Khan and “hopefully” visit the Line of Control over the next two days, he added.

“The situation [in occupied Kashmir] at the moment should concern the entire international community. The step taken by the Indian government is firstly a violation of their own constitution; secondly, it is a violation of different UN resolutions; and thirdly, it is in direct contravention of numerous international obligations that all states have, and in particular Article 49 of the fourth Geneva Convention,” he said. He went on to commend Pakistan’s “peaceful” response to the Indian government’s measures.

“We wholly condemn [the usage of such language]. I wanted to say this in Pakistan and in Azad Kashmir, I warn those people that use this very irresponsible language and they should refrain from using it. This is provocative language and it is being used on an international level; it is wholly inappropriate,” he said.

He also expressed concern over the “blockade” in occupied Kashmir and said that while the reports coming from the region — which has been under lockdown for over three weeks — were unconfirmed, the briefings that the British parliamentary delegation had received so far indicated that the events were leading up to a “very worrying situation”