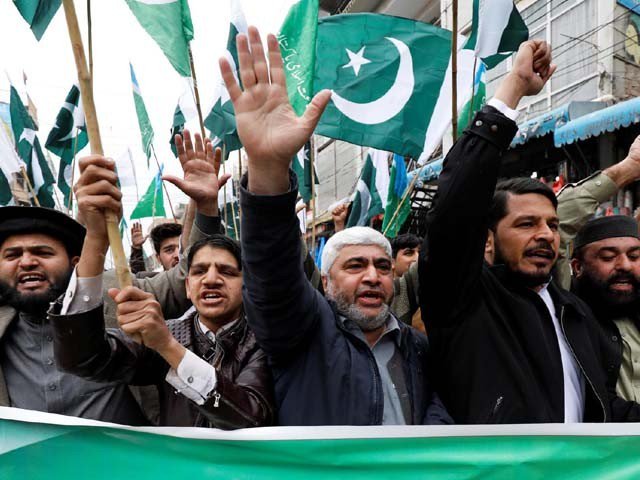 Shafaqna Pakistan:Indian-occupied Kashmir (IoK) has been under lockdown for more than three weeks now. Narendra Modi’s desire to annex the territory was already made clear during his election campaign, and thus many have been asking why Islamabad was unable to pre-empt this. But given that Modi’s move on the geopolitical chessboard caught Islamabad off-guard, the question arises: how should Pakistan respond? Perhaps by rallying on the streets for 30 minutes.

In a recently televised address, Prime Minister Imran Khan said that he wanted the people of Pakistan to come out onto the streets for half an hour every Fridays in order to stand in solidarity with the Kashmiri people and to raise a voice against India’s actions in IoK. But what exactly will this accomplish?

While it may be a hard pill to swallow, the truth of the matter is that Pakistan has been unable to muster the robust international support which was desperately needed in the wake of Indian hostility. Rhetoric and sloganeering aside, the fact remains that other than China, Iran and Turkey, no other country is siding with Pakistan on the Kashmir crisis due to their economic and geopolitical interests. As a result, it appears that in a moment of desperation, Imran now wants the masses to take to the streets in the hope that a show of unity will capture the attention of the world media. But an issue of this magnitude cannot be resolved like this.

A concerted diplomatic effort is the need of the hour. While the Kashmir issue was raised at the United Nations Security Council (UNSC), the meeting has thus far had no impact on the situation in IoK. The international community continues to remain silent about India’s actions and brutality in IoK, so it seems unlikely that mass demonstrations in Pakistan will help sway the interests of these nations. Imran needs to revisit his foreign policy options and should perhaps shuffle some faces like Maleeha Lodhi and Shah Mahmood Qureshi since they have been unable to create an effective Kashmir lobby in nations like the US and the UK. Without the support of these global superpowers, Pakistanis can demonstrate all they want, but it will lead not lead to any substantial ground change in IoK.

But what makes this situation all the more alarming is not just the apathy of the international community with regards to the lock-in Kashmir – it is the manner in which Modi’s international image has barely taken a hit. Just last week, Modi was welcomed with open arms and awards by both Bahrain and the United Arab Emirates (UAE), at a time when Pakistan is desperately calling upon its allies to raise a voice against the Modi regime. Visits by leaders from the Middle East and being personally chauffeured around by Imran means little if these leaders do not stand with Pakistan in times of need.

Furthermore, while Imran was imploring his countrymen to take to the streets, Modi was meeting with world leaders at the Group of Seven (G7) summit. During his conversation with Donald Trump, when the topic of Kashmir was breached, the American president essentially stated that India and Pakistan should be able to resolve the issue amongst themselves since Modi has the situation “under control”.

Therefore, one wonders, at a time when Islamabad is politically and diplomatically isolated, what impact will a half an hour protest for Kashmiris have on a situation which Pakistan seems to have very little influence over or global support for?

The harsh reality is that New Delhi, in spite of the atrocities in Kashmir, enjoys a good diplomatic position around the globe, while Pakistan is left with no option but to invent new ways to draw attention to the situation in the region. Imran is clearly scrambling to invent some out-of-the-box methods through which the plight of the people of Kashmir can be highlighted, and the Friday gathering seems like another idea on that rapidly shrinking list of options.

Imran needs to try and have more than just an occasional phone call with world leaders if he truly wishes to counter the narrative which Modi is disseminating on the global stage. Economic and political instability will only further damage Pakistan’s ability to be heard on the world stage. A 30-minute solidarity march every Friday, or wanting to ban Pakistan’s airspace for Indian aircrafts, will gain nothing for the people of Kashmir, other than lending support and voice, which the people of Kashmir already know they have from Pakistan.