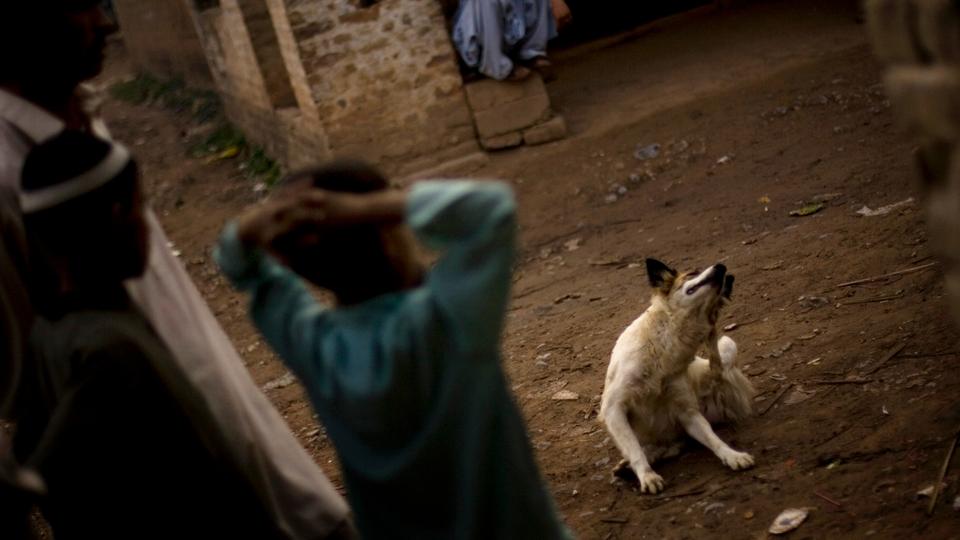 Shafaqna Pakistan:At least 14,000 people have been bitten by stray dogs in the last eight months, while the municipality struggles to address both public anger and pro-dog advocacy of animal rights groups.

Not too long ago, one of the biggest public hospitals in Pakistan’s financial capital Karachi faced an influx of injured men and women with gunshot wounds caused by criminal gangs, the Taliban and its proxies, and other violent political groups.

Although the city’s crime rate has dropped by a significant margin between 2013 and now, it’s facing a new menace– dog maulings.

In a city of 20 million residents, the stray dog overpopulation means streets full of canine gangs, chasing cars, pulling down motorcycle riders and pillions, and attacking pedestrians and school children.

As a result, people being diagnosed with canine rabies is commonplace in Karachi, a major public health hazard in the city. The data collected from three major hospitals reveals 14,000 people have received treatment for dog bites between the winter and summer of 2019 alone.

The number was higher last year with the same hospitals treating more than 18,000 cases of rabies caused by dog bites. Experts, however, argue that the actual number will be much higher as many cases are treated at private clinics or by spiritual healers or herbal doctors.

Some of the victims have died of rabies. Mishra Birbal, a 50-year-old woman, succumbed to her dog mauling injuries on July 17 at Karachi’s Jinnah Postgraduate Medical Centre (JPMC), having been infected with rabies transmitted by the dogs.

In the absence of anti-rabies vaccines in Karachi’s suburbs and rural parts of the entire Sind Province, the cases that are referred to Karachi’s major hospitals are critical in nature.

With12 rabies-related deaths reported in the last eight months, dog mauling has started to penetrate the country’s political discourse. The Pasban Democratic Party recently demanded the government declare a ‘rabies emergency’ in Karachi and ensure the easy availability of dog-bite vaccines.

“Most of the population are either unaware of the risk of rabies when bitten by stray dogs, or do not seek the right treatment for its prevention,” Muhammad Aftab Goher, manager at The Indus Hospital (TIH)’s rabies programme, told TRT World.

Goher said the rabies virus affects the human nervous system. Aggression, hallucinations and a fear of water are its main symptoms.

In Pakistan, rabies is endemic but not a notifiable disease, according to the World Health Organization (WHO).

According to the WHO, the disease shows no signs of abating in Karachi because of factors ranging from the lack of surveillance systems and collaboration between different government-run hospitals and departments to limited access to up-to-date rabies vaccines and immunoglobulin.

Muzzamil Ali, a grocery shopkeeper in the lower-income Orangi Town locality, and his school-going son, are among the latest victims to have been mauled by stray dogs.

“It was a horrific day for us. A stray dog pulled my son away and started mauling his body. When I tried to rescue him, the dog bit me too on the leg,” said Ali. Luckily, he and his son were quick to reach the JPMC where they were administered anti-rabies vaccines.

“The danger is real and immense,” warned Zahid Farooq, Joint Director at the Urban Resource Center, a Karachi-based civic rights body. He said that stray dogs have been roaming in almost all localities of the city and biting people, especially children, regularly. He fears the number could go up in the future as the municipality has failed miserably to check the growth of stray dogs.

Civic rights activists believe that the biggest reason behind the problem is unattended garbage – a burning issue for over a decade which has morphed into a tussle between the city’s municipality and the provincial government. Both sides blame each other for turning the city into a mess.

“Stray dogs rely on garbage while hunting for eatables. Countries that have garbage kept in bins and are cleaned regularly see lesser number of stray dogs,” Farooq told TRT World. “But across Karachi, heaps of garbage is a common sight on roads.”

Until recently, the municipality workers euthanised stray dogs with chicken meat laced with a poisonous substance. But the strategy drew intense criticism from animal rights activists who challenged the practice in the provincial high court in August 2016.

The municipality hasn’t come up with a new solution as yet. It’s caught between angry residents from lower-income localities who are most affected by stray dog attacks and animal rights activists who belong to the affluent class and have the means to pressure the municipality to stick to neutering the canines through surgeries.

Last year, the TIH, a charitable hospital, joined with the Karachi municipality for the ‘Rabies Free Karachi’ project, collaborating to concentrate on one locality – the coastal area of Ibrahim Haideri – to vaccinate all the dogs and catch strays and neuter them to control the dog population. For this purpose, a team of vaccinators and dog catchers, after receiving training from an international expert, vaccinated 3,500 dogs and 1,500 were neutered. “But it is obvious that street dogs from other areas couldn’t be taken to Ibrahim Haidri for neutralization,” said Genani.

TIH’s Goher said that the project received only 25 percent of the amount the municipality pledged, but thankfully, the remaining amount was collected from philanthropists and civil society. Municipality officials said that because of shortages of funds and decreasing mayoral powers, the city government could not provide full funding.

The vaccination and neutering experiment in Ibrahim Haidri showed positive results as dog-bite incidents decreased. The TIH felt encouraged to expand the project to three other low-income neighbourhoods.