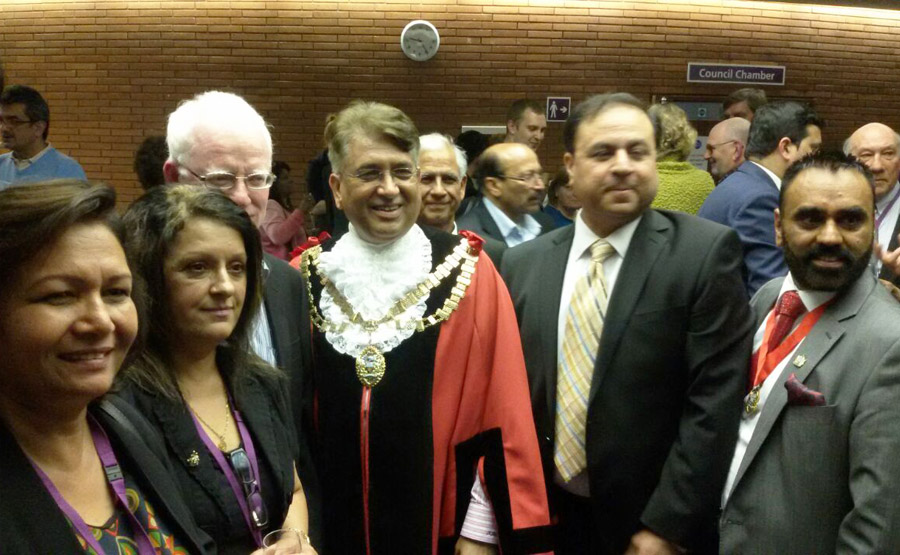 London’s west borough of Hounslow has appointed its first Muslim mayor who vowed to work on defusing community tensions by bringing together people from all backgrounds.

“I think there’s a little bit of work needed from both sides \[Muslims and non-Muslims] to defuse the pressure, which comes largely from misunderstanding,” Nisar Malik, who runs a string of halal counters at Asda supermarkets, told fellow councilors as he was sworn in last Tuesday, Get West London website reported on May 27.

“By mixing, talking and engaging with each other I believe we can achieve that and make this borough an even better place in which to live.

Malik arrived in London from Pakistan as a teenager in 1976.

Achieving success, Malik persuaded Asda to let him open a halal counter and he now runs 15 such counters at branches of the supermarket, employing more than 130 people.

Along with extending bridges between community groups, Malik has also made helping the older generation one of his key ambitions.

The father-of-three recalled how he noticed on arriving London nearly 40 years ago that many elderly people are being put in homes and forgotten about.

Therefore, he chose Contact The Elderly, which organizes tea parties for lonely and isolated older people, as one of his two mayoral charities.

The other charity he will be raising money and awareness for is Hounslow Toy Library, which loans toys and organizes play sessions for children with disabilities. It is due to celebrate its 40th anniversary next year.

Islam is Hounslow’s second biggest faith behind Christianity, with Muslims accounting for 14% of the borough’s population according the 2011 Census.

Though being the first Muslim to fill Hounslow mayoral post, Malik is not the first British Muslim to serve in a high-profile public post.

In May 2011, Councilor Naveeda Ikram was named as the lord mayor of the district of Bradford, the first Muslim woman to hold this high post.

Earlier in November 2010, Lutfur Rahman was elected as the mayor of the East London borough of Tower Hamlets, the first Muslim mayor in Britain. In 2007, Labour MP Shahid Malik became the first British Muslim minister after he was named as a minister under Secretary of State for the Department for International Development (DFID).

Malik has also served as Justice Minister, Home Office Minister and most recently as Minister for Race, Faith and Community Cohesion.

Another Muslim MP, Sadiq Khan, was appointed in 2007 as a government assistant responsible for parliamentary affairs.

In the 2010 parliamentary elections, eight Muslims were elected as MPs in the House of Commons. Baroness Sayeeda Warsi, a British-born of Pakistani origin, is the first Muslim woman to serve in the British Cabinet as minister without portfolio.