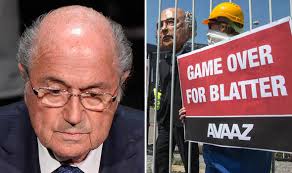 Soccer is the most popular sport in the world, with 240 million people regularly playing the game, according to a FIFA estimate. Even in the United States, traditionally considered indifferent to soccer, interest is growing. More Americans watched last year’s U.S.-Portugal World Cup game than watched the 2014 NBA Finals or baseball’s 2013 World Series. However the recent corruption scandal has rattled the soccer fans. It has seen two of its vice presidents amongst seven FIFA officials being arrested by the FBI in Zurich on charges of racketeering, money laundering and receiving kickbacks in marketing deals for tournaments. Though FIFA has since provisionally suspended them, the scam has snowballed into a major row which has shaken the very foundations of the world’s most popular game. The corruption scandal that has rocked the footballing world has done much more than that; it has tarnished the world’s greatest sporting event, the FIFA World Cup, which, barely a year ago lit up the world with its exuberance in Brazil. As the pressure mounts on FIFA – 7 of whose top officials were arrested in Zurich by the Swiss authorities, while 14 have been indicted by the United States Department of Justice – the scandal is spiralling into the political domain; with president Putin backing Sepp Blather, the president of FIFA, for another term as president and belittling the joint US-Swiss investigation by saying “this is yet another blatant attempt [by the US] to extend its jurisdiction to other states”. The European football body UEFA, which is considered the strongest amongst FIFA’s six continental federations, has been against another term for Mr Blatter because of the controversies that have plagued FIFA over the last four years. In view of the latest row, UEFA is demanding a change and is supporting Mr Blatter’s sole challenger and FIFA vice president Prince Ali bin al-Hussein of Jordan in the elections. Whatsoever the outcome of the situation, it is sad movement for the Soccer fans.
pakistan.shafaqna.com

Egypt likely to be removed from the 2018 World Cup