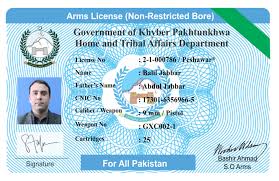 fter the government of Khyber Pakhtunkhwa (KP) issued over 500 prohibited bore (Kalashnikov) licences to doctors, a lawyer filed a petition in the Peshawar High Court that the same facility be extended to his profession too. While the court mulls over this new request, engineers, architects, teachers, and a dozen other professionals are readying their petitions to ask for their share of Kalashnikovs. After all, insanity should be distributed more equitably. But why seek official licences, when you can get one under the table. The Herald of April 2015 quotes Abdul Majid, a Peshawar resident obtained one for Rs 16,000 and Muhammad Tahir received a Kalashnikov licence for a bribe of Rs 90,000.

From 1947 to April 2013, KP had issued 3.34 million gun licences. As if this was not enough, from May 2013 to February 2015, it issued 161,441 additional gun licences. Imran Khan should be asked to put an end to this madness and stop the KP government from issuing any more gun licences.