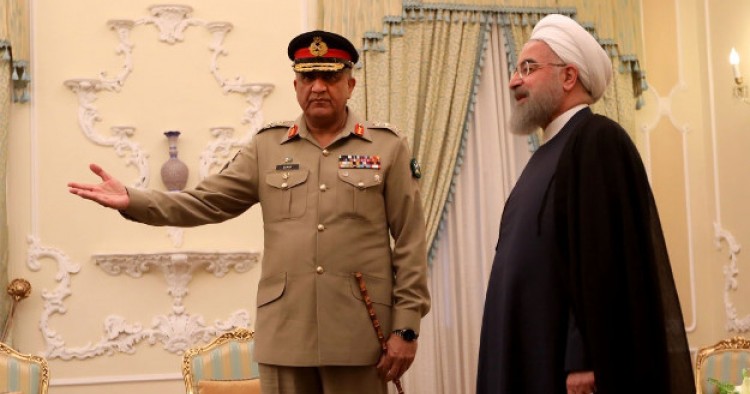 Shafaqna Pakistan:The low-key coverage by the Pakistani media on the 2-day visit of the army chief General Qamar Bajwa to Iran notwithstanding, the event signifies a surge in the tempo of ‘mil-to-mil’ exchanges between the two countries.

The Iranian side gave the event a distinct political coloring with the Pakistani COAS having meetings with President Hassan Rohani, Foreign Minister Mohammad Javad Zarif and the Secretary of the Supreme National Security Council Ali Shamkhani, apart from talks with his host, Chief of Staff of the Iranian Armed Forces Major General Mohammad Hossein Baqeri.

Border security and counter-terrorism are key issues for Iran. But Gen. Bajwa’s talks extensively covered regional developments and even dwelt on the two countries’ “coordination on the major issues of the Muslim world”. The Iranian reports did not make any references to the Kashmir issue or India-Pakistan tensions, but it is inconceivable that Gen. Bajwa sidestepped the topic.

In fact, even as Gen. Bajwa headed for Tehran on Monday, Pakistan conducted training launch of surface-to-surface ballistic missile Shaheen-1, a day after India conducted the first night trial of its Agni-II missile.

The Iranian news agency IRNA took note that the launch of Shaheen-1 “aimed at testing the operational readiness of Army Strategic Forces Command, ensuring Pakistan’s credible minimum deterrence.”
The Pakistani army spokesman tweeted that Gen. Bajwa discussed with Rouhani the “regional security environment and matters of mutual interest”. According to the Iranian agency IRNA, Gen Bajwa told Rouhani that Pakistan was prepared to strengthen bilateral relations “in all spheres”.

Rouhani, in turn, hailed Pakistan’s role towards regional peace and called the relations between the two Muslim nations as “an invaluable asset” which should be used to further boost mutual cooperation. The Iranian reports quoted Gen. Bajwa as saying Pakistan and Iran face “common threats and have common interests”, calling for close cooperation and interaction.

An IRNA commentary said, “In recent years, Tehran and Islamabad have witnessed high-level exchanges from top military officials and the recent visit of Pakistan Army Chief to Iran demonstrates the commitment of the two sides to consolidate defense ties through active diplomacy.”

Notably, Admiral Shamkhani, who reports to Supreme Leader Ali Khamenei, called for “all-out expansion of ties” with Pakistan “in a bid to provide regional security.” Equally, Foreign Minister Zarif and Gen. Bajwa “discussed a broad range of issues, including the political, economic and military relations” between Iran and Pakistan as well as “regional cooperation and the ongoing developments in the region, including the situation in Afghanistan.”

Without a doubt, the Iranian reports uniformly underscored Tehran’s high expectations that a new phase of Iran-Pakistan relations may be commencing. Gen. Bajwa’s visit tops up an intensification of high-level exchanges between the two countries during the past two-year period since his pathbreaking trip to Iran in 2017, which was the first by a Pakistani COAS in over two decades.

During the 2017 visit, Gen. Bajwa had told Rouhani that Pakistan was determined to expand its ties with Iran in all spheres and hoped that the two neighbors could collaborate for regional peace and security. To be sure, the shifts in the geopolitics of the region acted as a catalyst in injecting a new verve into the relationship.

Principal among them would be Delhi’s ‘pivot to Saudi Arabia’ in its Gulf strategy, markedly deviating from the traditional course of walking a fine line in the intra-Gulf discords and rivalries from a standpoint of benign neutrality.

Even as US-Iranian tensions began accelerating, the Modi government unceremoniously complied with Washington’s diktat to roll back ties with Iran by terminating all its oil imports from that country. The pusillanimous attitude of the self-styled nationalist leadership in Delhi took Tehran by surprise.

Tehran put its deep disappointment on display once it became apparent that Modi government retracted even from its commitments at the highest level of leadership to cooperate with Iran on the development of Chabahar Port, which was a key underpinning of regional connectivity and security linked to the stability of Afghanistan. (See my column in Rediff, Why Iran is upset with India.)

The Indian U-turn on Chabahar has come to symbolise the phenomenal shift in the Indian regional policies in the direction of harmonising with the US strategy at a critical juncture when Washington’s maximum pressure approach is fuelling tensions in the Gulf and leading to a steady augmentation of the American military deployments in Saudi Arabia that could well be the prelude to confrontation with Iran.

The unkindest cut of all is that Iran’s Sistan-Baluchistan province is also targetted by terrorist groups that are allegedly backed by Saudi Arabia. Tehran senses that Modi government is inexorably gravitating toward the US-Israeli-Saudi axis, jettisoning India’s traditional independent Gulf policies.

The ardor of PM Modi’s personal friendships with the Saudi Crown Prince Mohammed bin Salman and the Israeli PM Benjamin Netanyahu must have set alarm bells ringing in Tehran. On the other hand, Pakistan is closely gauging the downhill slide in the India-Iran relationship and estimating that the 40-year old Indian strategic embrace of Iran as a “second front” is ending.

Meanwhile, for the first time since the Islamic revolution in 1979, the Iranian leadership is appreciating Pakistan’s independent foreign policies. Tehran would estimate that conditions are getting ripe for a breakthrough in Pakistan-Iran military cooperation.

Importantly, the UN’s five-year timeframe for embargo on arms trade with Iran expires next year, while the eight-year limit on Iran’s missile activities ends in 2023. (See a recent IRNA commentary titled JCPOA, Sunset Clauses and struggle of Americans.)

Of course, Tehran’s willingness to support Pakistan on the Kashmir issue could be the ultimate clincher. In geopolitical terms, Iran’s overarching foreign-policy agenda of Eurasian integration brings Tehran and Pakistan more or less onto the same page in regional politics.

Zarif acknowledged at a recent meeting in Tehran with a group of visiting Indian writers and journalists that US economic and political actions had created “an understanding” between China, Russia and Iran “that we’re all (US) targets” and there was “a commonality being felt” by the leadership of the three countries. Of course, Islamabad is well aware of it, having been a “target” itself.