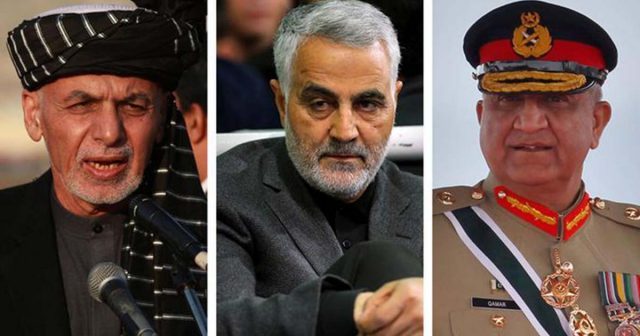 Shafaqna Pakistan:The United States reacted firmly after the killing of an American contractor on an Iraqi military base and the siege of its embassy in Baghdad. On Jan. 3, it killed the Iranian General Qassim Soleimani through an airstrike while he was leaving Baghdad international airport.

The airstrike makes clear that President Donald Trump’s military restraint strategy against Iran has abruptly come to an end. The shift in the American-Iran strategy has created severe internal and external puzzles for Pakistan’s ruling elite.

The Iranian Supreme Leader Ayatollah Ali Khamenei pledged “harsh revenge.” It seems an overarching unity of purpose in Iran: to strike back in the US, with all means available

The Inter-Services Public Relations (ISPR) chief tried to end any rumors by categorically stating: “Pakistan will not be a party to anyone or anything but will be a partner of peace and peace alone.” Despite the clarification, the spiralling of US-Iran tensions is alarming for Pakistan’s national security.

Both Washington and Tehran desire that Islamabad openly supports their stances.

President Donald Trump’s hesitation to take military action over the downing of a highly sophisticated American drone by Iran near its border in the Arabian Gulf, attacks on tankers off the Emirati coast and an attack on two critical Saudi oil facilities encouraged the Iranians to target Americans and their allies in the region fearlessly. But after a US military strike against an Iranian-backed militia sanctuary in Iraq and the killing of General Soleimani, that has changed.

Soleimani was the head of the Iranian Quds Force, a branch of Iran’s Revolutionary Guard Corps. He was responsible for orchestrating Iran’s quest for regional dominance and also famous for plotting proxy wars in the Middle East. Therefore, his elimination is a serious loss for the Iranian ruling elite, particularly its military establishment.

The Iranian Supreme Leader Ayatollah Ali Khamenei pledged “harsh revenge.” It seems an overarching unity of purpose in Iran: to strike back in the US, with all means available.

Though Iran cannot hit the heartland of the US, throughout the Middle East it is in an advantageous position in asymmetric warfare and exploiting grey areas through radicalized, militant proxies.

Iran is capable of targeting American contractors and soldiers deployed in the region. Besides, it may target American allies’ facilities through proxy militias in the Middle East.

It seems that the Americans will not be repeating their traditional bite-and-hold strategy. They use technologically advanced fighter jets and drones to erase pro-Iran militia sanctuaries located in the Middle East. Therefore, they don’t need Pakistan’s military bases for conducting military operations in the region.

However, at the political front, Washington may pressurize Pakistan for support, especially after Iraq’s parliament demanded the ousting of American troops from their country. Besides, America wants Pakistan to pacify China and Turkey’s stance on the crisis.

The message of this exercise was peace, friendship and lasting security through cooperation and unity

Islamabad needs to act very carefully when dealing with the current crisis. Iran’s volatile situation poses multifaceted challenges for the country due to its geographical proximity and Pakistanis’ religious and cultural affinity with the Iranians. Therefore, violence in Iran will create difficulties for the government in maintaining a balance between improving relations with Washington, satisfying the pro-Tehran lobby at home while also keeping cordial ties with Iran.

Increased tensions could also affect the current peace process in Afghanistan, and diverts the attention of the international community from the extreme policies of Prime Minister Narendra Modi in Indian-administered Kashmir and India.

A US-Iran confrontation will intensify the strategic competition in the Middle East.

In December last year, Russia, China, and Iran carried out a joint naval drill. The message of this exercise was “peace, friendship and lasting security through cooperation and unity.” Russia declared the killing of Soleimani a “reckless step,” while France pointed out that an escalation was underway.

As tensions within the great powers increase, Pakistan’s Middle Eastern policy ought to be grounded fully in realistic national interests and not ideological passions.