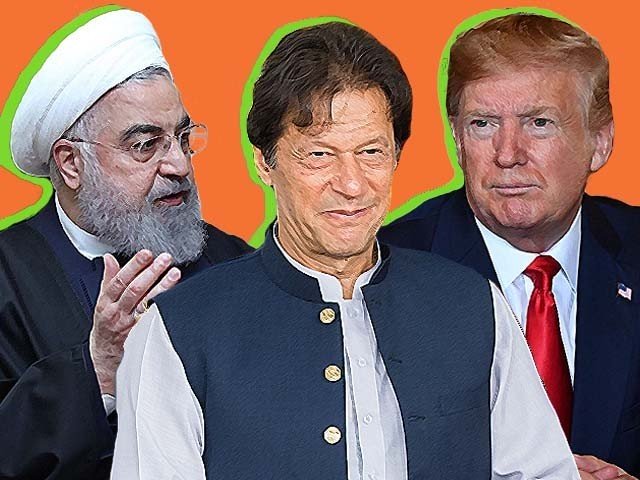 Shafaqna Pakistan: Sitting 8000 miles across the Pacific from my hometown Islamabad, I had to take a break from work for an early afternoon stroll along the Santa Monica Beach to make sense of recent developments in the Middle East and their wider implications.

My country of origin, Pakistan, has already seen the aftermath of indulging in proxy wars at a staggering human, social and economic cost. Hindsight in our case has unfortunately never been 20-20. Even after the relative de-escalation of tensions following President Donald Trump’s address last week, one still cannot dismiss the potential of one hasty tweet or one cyber-attack to set the region on fire once again.

While the singular act of Qasem Soleimani’s killing might qualify as Trump’s worst foreign policy blunder, Murphy’s Law suggests we should brace ourselves for something worse. Last week’s rocket attacks at Al Asad air base might be the first of Ayatollah Ali Khamenei’s so-called “slap in the face” but the time and manner of Iran’s retaliation to new sanctions and American pressure is what will ultimately determine the future of an already volatile region. As Tehran mourns the death of Soleimani and promises revenge, foreign policy hawks in Iran must already be at work to shore up support in case of an all-out US excursion. Amidst a possible reshuffling of alliances in the region, Pakistan seems to be a likely contender for Iranian support, and although Western media has downplayed this long-time nuclear-armed US ally in the region, the country’s role in containing or escalating the conflict can be crucial.

Perhaps US Secretary of State Mike Pompeo understood that, because of which Pakistan’s Chief of the Army Staff General Qamar Javed Bajwa was one of the first military leaders in the region he contacted after the strike. In line with the ruling political party’s stance, and cognisant of Pakistan’s deeply troubled history with proxy wars in the region, the army chief emphasised the “need for maximum restraint and constructive engagement.” How Pakistan’s role, if any, in the broader Middle East conflict pans out will depend on the Iranian response going forward – most likely covert cyber-attacks or attacks by Iranian proxy forces that have strongholds across Syria, Lebanon and the Greater Middle East region. A knee-jerk reaction, possibly targeting US or Israeli civilian targets or diplomats, could very likely pitch the region in another endless war. The missile attack on a US base in Iraq and the accidental downing of an airplane has placed the entire region on edge.

Future scenarios of conflict seem equally unfathomable. Most defence analysts on either side of the political spectrum are understandably left agape; the US response was nothing more than an anomaly under most plausible scenarios, with most war games testing conventional, tit-for-tat responses ranging from cyber-attacks, oil supply targets, sanctions and retaliatory rhetoric from both sides. Iran’s extent of nuclear posturing is one key variable in most table-top exercises, and with Iran officially pulling out of most obligations under the 2015 nuclear deal; the stage is once again set for Iran pursuing its uranium enrichment and weapons development goals, even though some important aspects including inspection under the agreement still remain in place. While the targeted killing of Soleimani defies most assumptions and opens up multiple, uncharacteristically unique possibilities, Pakistan’s role in a future conflict has surprisingly not made headlines at home or abroad.

It is perhaps due to the Pakistan government’s focus on economic uplift, as well as engagement with India on Kashmir and other fronts, that Pakistan has decided to stay impartial in the conflict. This is a welcome stance since the country had a lot to lose and not much to gain after its unholy alliance with jihadists during the Soviet invasion of Afghanistan in the 1970s, and with the US in the post-9/11 war on terror. Better sense has since prevailed, with the army finally taking the battle against extremist elements in the northwest as its own, refusing to send troops to support Saudi Arabia in Yemen in 2015 and releasing an Indian air force pilot to quell down rumors of a full-fledged India-Pakistan war in the wee months of 2019.

Focused on improving the country’s economy for a possible second term in office, Prime Minister Imran Khan has been the self-styled broker of peace in the region since taking over office in 2018, urging economic cooperation and meeting Crown Prince Muhammad Bin Salman twice last year in Saudi Arabia, the last visit as recent as December 2019. A couple months before his visit to Saudi Arabia, Khan met Iranian President Hassan Rouhani with the explicit aim to “promote peace and security in the region.” In a highly controversial decision, allegedly at the behest of Salman, Pakistan hastily pulled out of the Islamic Summit in Kuala Lampur, a gathering of leaders from around 20 Muslim nations, which the Saudi prince views as challenging the Jeddah-based Organisation of Islamic Cooperation (OIC).

In exchange for economic aid, relaxations in visa requirements for Pakistani workers in Saudi Arabia and more recently, Salman breaking royal protocol to drive Khan himself, Pakistan seems to have once again fallen for the Saudi bait and will most likely, align with the Kingdom (and, by extension, with the United States) rather than remaining impartial in a potential future US-Iran conflict. Parallel to this development, in December 2018 India signed a bilateral agreement on the Iranian port of Chabahar, which Prime Minister Narendra Modi sees as a potential point of access to Afghanistan and more importantly, as a way to bypass the China Pakistan Economic Corridor (CPEC), in time before the full withdrawal of US forces from Afghanistan. Senior officials, including foreign ministers from the two countries, met on the sidelines of last year’s United Nations general assembly (UNGA), even as the US rallied to isolate Iran through sanctions and allegations of financing terrorism. Nonetheless, for now, Pakistan’s Foreign Minister Shah Mehmood Qureshi, during recent visits to Tehran and Riyadh, has emphasised the need for maximum restraint.

How the India-Iran and Saudi-Pakistan nexus plays out in a future escalation of tensions between Iran and the US is yet to be seen, but the relationships could play a vital role if US and Iran become decisively engaged. If the Pakistani civilian and military establishment, who finally seem to see eye-to-eye on major issues of foreign policy, play their cards right – the situation in Iran and the geopolitics of the region allow Pakistan to tip the balance of power away from the Saudi-US coalition, and towards a more balanced, economically beneficial outcome that pitches Pakistan as an honest broker of peace in a very volatile Middle East. On the contrary, if Pakistan’s claims for peace and prosperity in the region turn out to be mere lip-service, and Pakistan resumes its erstwhile role of proxy war mongering, economic prosperity and the very future of democracy in Pakistan might again be put at risk.