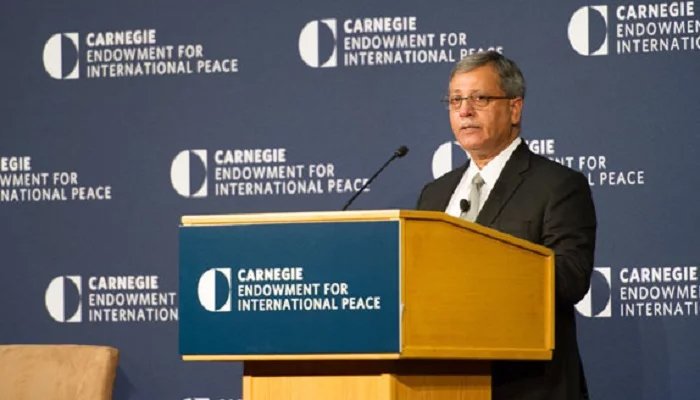 Shafaqna Pakistan:Pakistan Army’s former officer, Lt Gen (r) Khalid Kidwai, on Friday warned India not to take Islamabad’s “nuclear capability as a bluff” and said that the country reserved its right to exercise all options to protect territorial and ideological interests in case of a war-like situation.

The remarks, made by the former director-general of the Strategic Plans Division, retired Lt Gen Khalid Kidwai, were made while he gave a keynote address at a workshop held by the International Institute of Strategic Studies (IISS) in London.

The opening remarks of the workshop were available for public viewing but the remaining conference was held behind closed doors for a select group of people. The discussions held during the day-long conference on nuclear deterrence in South Asia remain off the record.

“Pakistan must shoulder the responsibility of maintaining the vital strategic balance in the conventional and nuclear equation with India as the particular determinant of the state of strategic stability in South Asia,” retired general Kidwai said in his opening remarks.

In his keynote, the former general spoke in great depth about the strategic positions of both India and Pakistan in the event of further escalation between the two hostile neighbours.

“If Pakistan were to allow imbalances to be introduced in this strategic equation, South Asia would list more serious strategic instability,” he said.

“This, in turn, would lead to catastrophic consequences in view of India’s historically persistent and insatiable drive for regional domination, especially given India’s current irrational, unstable and belligerent internal and external policies,” he added.

Indian Prime Minister Narendra Modi’s decision to illegally annex Kashmir, adopt a discriminatory citizenship law, and back a plan to build a temple on the site of the demolished Babri mosque has fanned concerns that he was marginalising the Muslim minority in the country.

Coupled with the decisions taken above, the Indian military chief has also given a slew of irresponsible statements to the media over the past few months regarding Indian plans to target Azad Kashmir, leading to increased tensions between nuclear-armed Islamabad and New Delhi.

Speaking on the escalation of tensions between the two countries, Lt Gen (r) Kidwai said: “It is difficult to predict any kind of escalation management because the two sides do not have any indirect channels, track 2 or track 1 channel, and there’s a complete cut off between the two sides as was quite evident in the event of February 29 last year.”

Indian fighter jets had attacked Pakistan in February last year but Pakistan had successfully repulsed the attack, downing an Indian jet and capturing the pilot, who was later released as a goodwill gesture by PM Imran.

“We will lurch from one crisis to the other until a third party intervenes as it did in the crisis last year. It’s a very unhappy situation,” Kidwai said during his address.

“Pakistan’s policy in a limited conflict is quid pro quo plus, which amplifies very clearly that we will not take any act of aggression lying down. If that kind of situation reemerges in any future conflict, I don’t see any reason why Pakistan will change that policy.

“It’s precisely these nuclear weapons which have deterred India from expanding operations beyond a single unsuccessful airstrike,” he further stated. “The Indian military has drawn some very wrong conclusions despite whatever they tried at Balakot.

“The Indian media has misled its strategic planners in making it appear as if India was able to come out of this conflict successfully through spinning false stories about the episode,” he added.