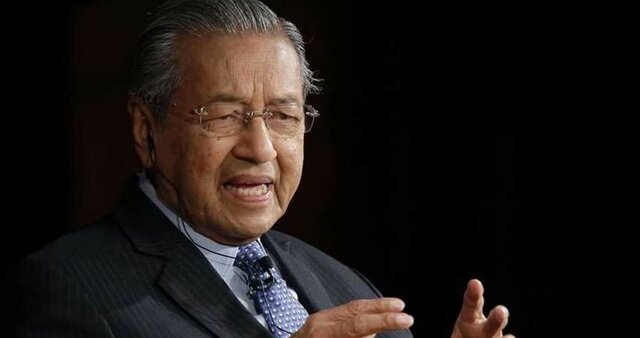 SHAFAQNA- Malaysian Prime Minister Mahathir Mohamad said the Trump’s Middle East plan is “utterly unacceptable“ and “grossly unjust.” “The plan, dubbed the “Deal of the Century” by Trump, hands the holy city of Al-Quds on a silver platter to Israel in absolute disregard for the feelings of millions of Muslims and Christians worldwide”, Mahathir said in a speech in Kuala Lumpur on Saturday, as Bloomberg reported. “This deal will only bring more conflict to the region, and will antagonize billions of people around the world,” Mahathir said at the third conference of The League of Parliamentarians for Al-Quds. He noted that Trump’s plan “only recognizes Israeli occupation and completely ignores the rights of oppressed Palestinians.” Mahathir highlighted that the so-called deal of the century was devised without consulting Palestinians, and is only supported by Israeli officials. Pointing to Israel’s acts of aggression against the Palestinians, the Malaysian premier said that his country will not keep silent on the oppression of Palestinians by the Israeli regime. “We are duty-bound and this responsibility is further amplified when powerful nations that had styled themselves as the defender of justice and freedom choose to be silent while the atrocities are being committed. “In other words, if we too choose to be silent, the blood from the murders and killings of the Palestinians by the Israelis is on our hands as well,” Mahathir pointed out, according to Press TV. He pointed to a report by prisoners’ rights group Addameer about more than 12,000 Palestinian children detained by Israel since 2000 and held in the same detention facilities as adult Palestinian prisoners, the 94-year-old Malaysian prime minister said humanitarian organizations such as UNICEF have long documented the Tel Aviv regime’s violations against Palestinian children, who are prosecuted in Israeli military courts. “It is clear that these detainees are being used by Israel to exchange for Israeli soldiers captured during incidents. For all these, Israel should be condemned and punished,” Mahatir said. Prime Minister Dr Mahathir Mohamad also offered a short advice to US President Donald Trump. Speaking to reporters at the Third Conference of the League of Parliamentarians for Al-Quds, Dr Mahathir was asked if he had any advice for Trump. To this, the prime minister replied: “Resign.” Touching on the recently concluded impeachment trial, Dr Mahathir said he wished the American Senate would have made a better decision. Trump was acquitted in the impeachment trial that ended this week, on both articles. “Here is a man who denigrated his own country’s policy trying to use foreign pressure in order to win election and yet that is acceptable to America. “It is not acceptable here, if any foreigners try to influence the result of elections here, we’ll take action against the people here who try to do that,” Dr Mahathir remarked, nst told.