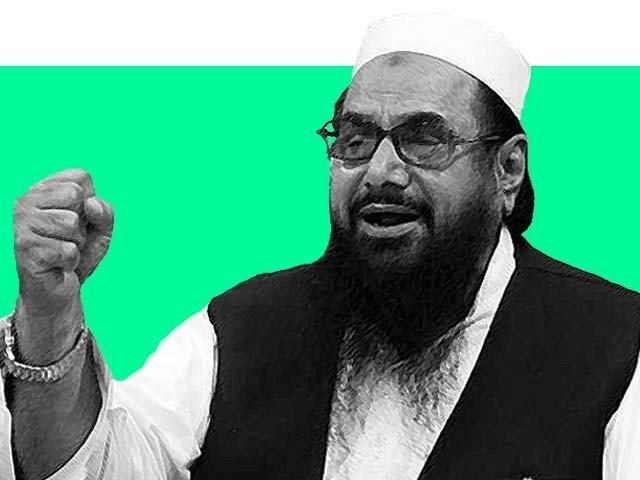 Shafaqna Pakistan:In a recent development, Hafiz Saeed, the head of the proscribed Jamat-ud-Dawah, has been sent to prison for five and a half years by the anti-terrorist court in Lahore.

Naturally, this news quickly made it to the the headlines across the globe since Saeed’s name is included in the list of banned terrorists by the United States (US) and United Nations (UN). Saeed is also wanted by India for his alleged role in the 2008 Mumbai attacks. But one cannot understand the impact of Saeed’s arrest if one is unaware of exactly what Saeed has been up to for all these years.

Saeed is one of the founders of the banned terrorist group Lashkar-e-Taiba and has a bounty of $10 million on his head set by the US. In Pakistan, Saeed is a household name and many see him as a champion of the Kashmir cause.

Saeed’s Lashkar-e-Taiba played a pivotal role during the 1990s in spreading the narrative of martyrdom among the youth of Pakistan and he prepared thousands of youngsters to fight for the freedom of Indian controlled Jammu and Kashmir.

At that time, the powers that be backed Saeed and he succeeded by not only sending jihadis into Indian-occupied Kashmir (IoK) but also by influencing the youth in the region to wage a war against India for the separation of IoK. However, after 9/11, the dynamic changed and Pakistan had to roll back the policy of nurturing jihadi elements and using them as strategic assets against India.

Though Saeed continued to enjoy influence even after 9/11, his alleged involvement in the attack on the Indian parliament in 2001, and in the Mumbai train bombing in 2006, made it difficult for the authorities in Pakistan to continue their open support for him. He was placed under house arrest many times just to convince the world that Pakistan was serious about taking action against all the extremist outfits and their leadership.

However, after the Mumbai attacks in 2008, which Saeed allegedly masterminded, it became more difficult for the then government of the Pakistan Peoples Party to defend or protect Saeed. His movement was restricted and after that he spent most of his time under house arrest.

After the 2013 elections, when Nawaz Sharif took charge as prime minister, he, as usual, kept the portfolio of the foreign minister with him in order to take control of the foreign policy. Hence, the infamous “Dawn Leaks”, which became the main reason for the rift between Sharif and the establishment, centred around extremists like Saeed.

However, despite the growing isolation on the diplomatic front over nurturing extremist outfits and fanatics like Saeed, the powerful quarters did not change their policy, and Pakistan kept Saeed as its weapon for Kashmir infiltration. The consequences were not only limited to global isolation but also resulted in Pakistan being put onto the grey list of the Financial Action Task Force (FATF).

Incorrect policies which fueled the likes of Saeed not only brought extremism into Pakistan and created millions of minds full of hatred but they also weakened the secular and progressive voices in Jammu and Kashmir who were calling for an unarmed movement for the plebiscite.

Hence, Saeed was always a liability for Pakistan and right now, when the US is again dependent on Islamabad to broker a peace deal with the Taliban in Afghanistan, Saeed’s arrest is not particularly surprising. It is an old US tactic to get things done by using institutions like FATF and the International Monetary Fund (IMF) to its advantage.

Pakistan is currently enduring self-inflicted economic turmoil and is hence heavily dependent on the IMF for aid and is also hoping that FATF will not put the country on the blacklist, thus imposing economic sanctions on Pakistan. Evidently, Saeed was convicted to improve Pakistan’s optics.

Given the situation in Afghanistan, Washington will definitely help Pakistan out indirectly to get out of the FATF grey list, or at least make sure that Pakistan’s name is not included in the blacklist. However, the problem remains that Washington has always given its tacit approval to Islamabad to use the likes of Saeed as its strategic assets.

Not only is conflict between India and Pakistan beneficial for the US weapons industry but people like Saeed are also helpful in Afghanistan for the strategic interests of Washington. For now though, the US has praised the jailing of Saeed.

Recently, the mysterious escape of the former spokesperson of the Tehreek-e-Taliban Pakistan (TTP), Ehsanullah Ehsan, from the safe-house of the law enforcement agencies also raises many questions. It is not possible for the likes of Eshan to escape so easily from captivity and it seems that he has been freed as a result of the ongoing negotiations between the Taliban, US and Pakistan. The question remains, till when, for the sake of our so-called strategic interests and Washington’s vested interests, will we continue to nurture the likes of Saeed and let the likes of Ehsan off the hook.

Our foreign policy is a Washington and Riyadh centric one, and until that changes we will continue to fight proxy battles at the behest of America and Saudi Arabia in order to keep our economy ticking. Neither Washington nor Riyadh will allow Pakistan to escape its financial trappings and become a self-reliant state whose foreign policy narratives can then be shaped independently and without creating extremists like Saeed. In the long run, Pakistan needs to get rid of the rotten narratives of violating geographical boundaries through militant organisations and the use of force. At the end of the day, Saeed is just a puppet. Pakistan needs to stop producing and nurturing extremists like Saeed for the sake of foreign powers, or the so-called strategic interests, and needs to understand that the real strategic assets of the country are the children who need to grow in an atmosphere free of extremism, violence and warmongering. It is time to think about the coming generations who should be given a country that Jinnah envisioned, not the country which was hijacked by dictators and till today is being ruled through the narrative of extremism.