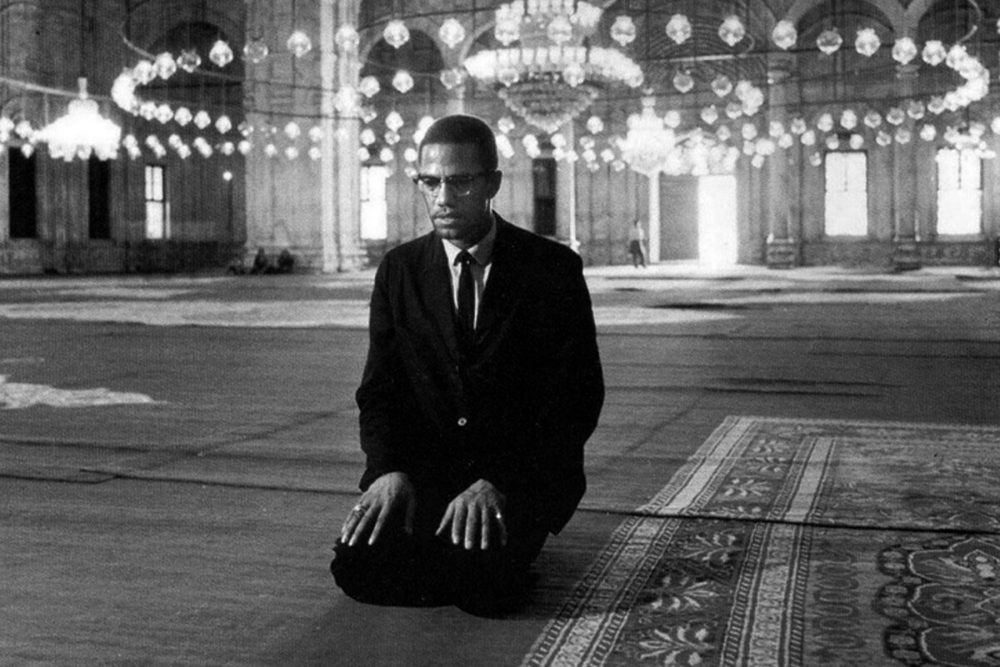 February 21 marks the 55th anniversary of the murder of the great American Muslim Malcolm X. Malcolm is mostly renowned as a political figure of huge significance, but researcher Tamim Mobayed argues that we must not ignore his spiritual side.

Of the many pertinent lessons to be drawn from his life can be found in his marriage of the political and spiritual facets of Islam, because the separation of these two aspects of the religion belies a poverty that has grown within the Muslim community.

In Malcolm, we see an example of how both facets are mutually nurturing and dependent on each other. And by reading into his life and two key periods of spiritual significance, we see how they precede two key consequent periods of political growth.

While Malcolm is largely characterised as a political figure, his spiritual awakening played a critical role in his emergence from darkness. In his autobiography, he describes the initial steps he embarked on when first becoming aware of the Nation of Islam’s (NOI) brand of Islam – he managed to give up cigarettes and pork with relative ease. Praying was more difficult:

“The hardest test I ever faced in my life was praying. You understand. My comprehending, my believing…had only required my mind’s saying to me,’That’s right!’ or ‘I never thought of that…But bending my knees to pray — that act — well, that took me a week.” “I had to force myself to bend my knees. And waves of shame and embarrassment would force me back up. For evil to bend its knees, admitting its guilt, to implore the forgiveness of God, is the hardest thing in the world. It’s easy for me to see and to say that now. But then, when I was the personification of evil, I was going through it. Again, again, I would force myself back down into the praying-to-Allah posture. When finally I was able to make myself stay down — I didn’t know what to say to Allah.”

One of the endearing factors of Malcolm’s life lies in the admirable U-turn he took, from a life replete with hedonism to one of a proverbial saint. By the time Malcolm had left prison, he had transformed himself discernibly; he was a man who had conquered his self. In the words of one of his enemies:

This level of discipline and commitment to the faith is a shining example of a man in tune with his spiritual self. Malcolm could have been politically active yet indulgent in a range of vices, such as the late Drs Martin Luther King and Huey Newton. His commitment to his faith prevented that, and is among the reasons that distinguished Malcolm; his war on his self was key to his development.

On his release from prison, reformed Malcolm’s growth accelerated; he is credited with helping the NOI’s bombastic growth from 1,200 members in the early 50s to 75,000 active members by the early 60s.

Despite his activism, Malcolm’s politicism was largely muzzled due to the NOI’s strict apoliticism; members would be sanctioned for engaging in political acts, such as attending rallies and voting. While he might have developed his name as an incisive and provocative speaker, it was after his divorce from the NOI and his second spiritual awakening that his politics began to truly ignite.

Lost and in need of direction, Malcolm embarked on his paradigm shifting Hajj. In the words of his biographer, Manning Marable:

“The chance for spiritual purification at this juncture of great change and uncertainty seemed too important to pass up.”

Indeed, Malcolm was a deeply spiritual man. In the words of Dr Mahmoud Sherbawi, a man who helped guide towards Sunni Islam:

“(Malcolm) sometimes would even cry while passages of the Holy Koran were being read.”

The profound spiritual and political impact that the Hajj had upon Malcolm was clear to see in his writings. Most notably, the Hajj allowed for a significant change in Malcolm in regards to his racialist ideas, one that had been building up for sometime:

“The very essence of the Islam religion in teaching the Oneness of God, gives the Believer genuine, voluntary obligations towards his fellow man (all of whom are One Human Family, brothers and sisters to each other)…the True Believer recognizes the Oneness of all Humanity.”

Malcolm returned from the Hajj energised and recalibrated:

“He could also now see the role Islam would play not just in his spiritual life, but in his work. As Malcolm reflected on his hajj experiences, he concluded that ‘our successes in America will involve two circles, Black Nationalism and Islam.’”

The role of spiritual growth as a catalyst for political dynamism within Malcolm’s life is undeniable.

The political and the spiritual

This marriage of the two spheres, the political and the spiritual, is best embodied in the two organisations founded by Malcolm as he strove to carry out his calling in the days after the NOI – the secular Organisation of Afro-American Unity (OAAU) and the Islamic Muslim Mosque Inc. (MMI).

One was to be a vehicle that carried a range of activists along the journey of civil rights and equality, regardless of their religious alignment, while the other would see to it that American Sunni Islam would be given space to mature and root itself within the community.

His appreciation of the need to engage within secular spaces, as well as the necessity to cater for the religious needs of the community, should be a blueprint for Western Muslims.

Considering that Malcolm’s first spiritual awakening came through one of the five pillars, the prayer, while the second was inspired by another pillar in the Hajj, the role of spirituality within this political juggernaut should not go amiss.