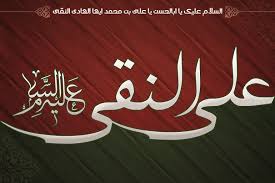 The Tenth Imam (as)’s Companions
Among the tenth Imam (as)’s companions, we see figures like ‘Ali b. Ja‘far Minawi was imprisoned by Mutawakkil with the intention to kill him. Another of his companions was the famous literary scholar, Ibn al-Sikkit who was martyred by Mutawakkil.
The reason for his martyrdom is reported to be as follows: When Mutawakkil’s two children were studying with him, Mutawakkil found out through his children that Ibn Sikkit was an advocate of Imam ‘Ali (as) and his progeny (as). Being an adamant enemy of ‘Ali’s household (as), Mutawakkil once summoned Ibn Sikkit to his court and asked him: “Who are more honorable and superior, my children or ‘Ali’s sons, Hasan and Husayn?”
Being a Shi’ite and a loyal lover of ‘Ali’s household (as), Ibn Sikkit fearlessly replied: “Your children are not comparable to Imam al-Hasan (as) and Imam al-Husayn (as) who are two newly blossomed flowers of Allah’s Garden of Eternity. How can your kids be compared with the beloved sons of Mustafa (S)? They cannot be compared even with Qanbar, the retainer of Imam ‘Ali (as).”
Extremely disturbed by this reply, Mutawakkil immediately ordered to cut off Ibn Sikkit’s tongue, thus killing as a martyr the pure Shi‘a and the genuine companion of the tenth Imam (as).
Hadhrat ‘Abd al-‘Azim Hasani is among other companions of Imam al-Hadi (as). As Muhaddith Qummi has stated in Muntahi al-Amal, “His noble lineage is traced through four generations back to Imam al-Hasan al-Mujtaba (as). He was among the great transmitters of hadith and the most pious scholar of his time. He was also a companion and comrade of Imam Jawad (as) and Imam al-Hadi (as). Sahib b. ‘Ibad has written a short treatise on his noble life.”
It has been written that Hadhrat ‘Abd al-‘Azim was scared by the caliph of his time and was forced to wander from town to town as a courier and messenger until he arrived in Rey and took shelter in a Shi‘ite man’s house.”5
“Hadhrat ‘Abd al-‘Azim enjoyed an ardent belief in Imamate. It is implicated that the fear this great scholar of hadith and ascetic had of the authority of the time was not due to his being an ascetic or a transmitter of hadith, rather it was because of his political culture and outlook.
Like other great propagators and mujahids of truth and justice, he made attempts in dissemination of genuine political culture and rectification of leadership principles in the Islamic community; probably being sent on such missions by the Imam (as), because it is not likely that a man of such status, religiosity, and piety – the one who used to present his ideas to the Imam (as) to be verified and reassured – to have had social and positional actions contrary to the Imam (as)’s ideas, and without his consent. This has been the case, whether the consent has been asserted, or Hadhrat ‘Abd al-‘Azim had himself attained it by religious culture and political jurisprudence”.6

Imam al-Hadi (as)’s Countenance and Conduct
The 10th Imam (as) was neither short nor lanky and his cheeks were slightly chubby and whitish pink. He had large eyes and bushy eyebrows. He was very generous. He was so awe-inspiring that whenever he entered the court of Muttawakkil the tyrannical caliph of the Abbasids, the latter and his courtiers would immediately rise to their feet as a sign of respect and reverence.
The caliphs contemporary to Imam al-Hadi (as) were: Mu‘tasim, Wathiq, Mutawakkil, Muntasir, Musta‘in, Mu‘tazz, and Mu‘tamid, who were all old enemies of the ‘Alawi family and Imam al-Hadi (as) out of their infatuation with temporal power and the worldly pleasures.
Although they somehow openly displayed their enmity, yet they admitted the competent features and the high piety and erudition of the Holy Imam (as). They had also tested and observed by experience his virtues, scholarly insight, and mastery over Islamic and jurisprudential issues and had witnessed his vast field of knowledge, like that of his honorable ancestors (as), in debates and argument sessions.
At nights, his time was mostly spent in prayers, supplication, reading the Qur’an and communion with the Beloved Allah. He used to wear a rough robe and sit on a straw mattress. Any gloomy person who glanced at him would get delighted. He was loved by all. There was always a smile on his lips, though it was his awe-inspiring character that greatly captured people’s hearts.

Imam al-Hadi (as)’s Wife and Children
Imam al-Hadi (as) had married a woman named Susan or Salil, and had five children:
1. Abu Muhammad al-Hasan (as) (Imam al-‘Askari, the eleventh Infallible Imam).
2. Husayn.
3. Sayyid Muhammad, who died a year before his father’s Martyrdom. He was a refined and virtuous young man who was thought by many to be appointed as the next Imam. Frequently visited by Shi‘ites, his sanctified grave is near Samarra
4. Ja‘far.
5. ‘A’isha, or as quoted by Shaykh ‘Abbas al-Qummi, ‘Aliyya.

Some Sayings of His Holiness Imam al-Hadi (as):
I. Whoever is selfish and self-satisfied, people will soon be infuriated at them.
2. The grievance for the person who is patient is single, but for the one who laments and wails is double.
3. Idle talking and joking is a character of the unwise and the feature of the ignorant.
4. Staying awake for long makes sleeping enjoyable and bearing much hunger increases the joy and delight of eating.
5. Divine decrees will show you things which have never struck your mind.
6. Wisdom will not have any impact on corrupt natures.
7. To Allah belongs shrines in which He likes to be prayed and to answer to prayers. Imam al-Husayn (as)’s burial place is one of them.
8. He who takes heed of Allah, people will take heed of him. He who obeys Allah will be obeyed by people. The one who is obedient to Allah does not fear the created ones, and anyone who enrages Allah would certainly be enraged by people.
9. Verily, it is not possible to describe Allah, except through what He has described Himself. How could He be described, whereas senses fail to perceive and imaginations cannot reach Him.
Notes:
1. Imam dar ‘Ayniyat-i Jami‘a, p. 82.
2. Imam dar ‘Ayniyat-i Jami‘a, pp. 84-85 (summarized and slightly changed).
3. Imam dar ‘Ayniyat-i Jami‘a, p. 95.
4. Ibid, p. 88.
5. Muntahi al-Amal, (with a slight change).
6. Imam dar ‘Ayniyyat-i Jami‘a.