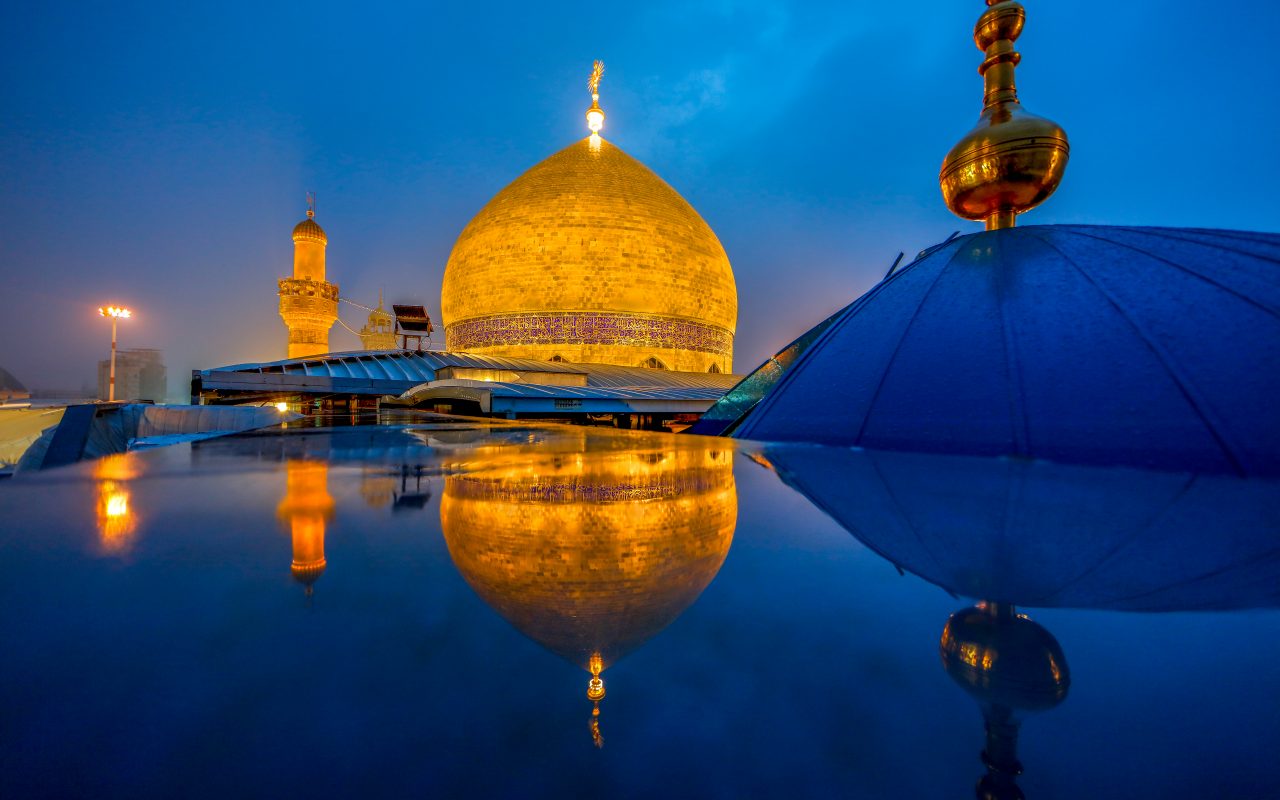 Ali ibn Abi Talib, the cousin and son-in-law of the Holy Prophet Muhammad, was born on the 13th day of the Islamic month of Rajab. He was born inside of the holy Ka’aba, making his birth, life, and legacy one of the most inspiring and important only after the Prophet himself.

In devoted remembrance and respect of the life Imam Ali led for all Muslims, here are just 15 of his most inspiring sayings:

1. Through Waves of Mischief

“O People! Steer clear through the waves of mischief by boats of deliverance, turn away from the path of dissension and put off the crowns of pride. Prosperous is one who rises with wings (i.e. when he has power) or else he remains peaceful and others enjoy ease. It (i.e. the aspiration for Caliphate) is like turbid water or like a morsel that would suffocate the person who swallows it. One who plucks fruits before ripening is like one who cultivated in another’s field.” [Nahjul Balagha, Sermon 5]

2. Mountains May Move From Their Position, But You Should Not

“Mountains may move from their position, but you should not move from yours. Grit your teeth. Lend to Allah your head (in fighting for Allah, give yourself to Allah). Plant your feet firmly on the ground. Have your eye on the remotest foe and close your eyes (to their numerical majority). And keep sure that succour is but from Allah, the Glorified.” [Nahjul Balagha, Sermon 11]

3. There is Right and There is Wrong

“Beware that sins are like unruly horses on whom their riders have been placed and their reins have been let loose so that they would jump with them in Hell. Beware that piety is like trained horses on whom the riders have been placed with the reins in their hands, so that they would take the riders to Heaven. There is right and wrong and there are followers for each. If wrong dominates, it has (always) in the past been so, and if truth goes down that too has often occurred. It seldom happens that a thing that lags behind comes forward.” [Nahjul Balagha, Sermon 16]

“Certainly the outside of the Qur’an is wonderful and its inside is deep (in meaning). Its wonders will never disappear, its amazements will never pass away and its intricacies cannot be cleared except through itself.” [Nahjul Balagha, Sermon 18]

5. You Have Been Guided If You Accept Guidance

“Indeed, if you could see that has been seen by those of you who have died, you would be puzzled and troubled. Then you would have listened and obeyed; but what they have seen is yet curtained off from you. Shortly, the curtain would be thrown off. You have been shown, provided you see and you have been made to listen provided you listen, and you have been guided if you accept guidance. I spoke unto you with truth.” [Nahjul Balagha, Sermon 20]

6. Your Ultimate Goal is Before You

“Your ultimate goal (reward or punishment) is before you. Behind your back is the hour (of resurrection) which is driving you on. Keep (yourself) light and overtake (the forward ones). Your last ones are being awaited by the first ones (who have preceded).” [Nahjul Balagha, Sermon 21]

7. One Who Is Sweet Tempered Can Retain the Love of His People

“Behold! If any one of you finds your near ones in want or starvation, he should not desist from helping them with that which will not increase if this help is not extended, nor decrease by thus spending it. Whoever holds up his hand from (helping) his kinsmen, he holds only one hand, but at the time of his need many hands remain held up from helping him. One who is sweet tempered can retain the love of his people for good.” [Nahjul Balagha, Sermon 23]

8. Stand By What He Has Enjoined Upon You

“O creatures of Allah, fear Allah and flee unto Allah from His wrath (seek protection in His Mercy). Tread on the path He has laid down for you and stand by what He has enjoined upon you. In that case ‘Ali would stand surety for your success (salvation) eventually even though you may not get it immediately (i.e. in this world).” [Nahjul Balagha, Sermon 24]

9. Loyalty and Truthfulness are Twins

“O people! Surely loyalty (fulfilment of pledge) and truthfulness are twins. I do not know a better shield (against the assaults of sin) than it. One who realises the reality of return (to the next world) never betrays. We are in a period when most of the people regard betrayal as wisdom. In these days the ignorants call it excellence of cunning. What is the matter with them?” [Nahjul Balagha, Sermon 41]

10. Become Sons of the Next World

“You should know this world is moving rapidly and nothing has remained out of it except last particles like the dregs of a vessel which has been emptied by someone. Beware, the next world is advancing, and either of them has sons i.e. followers. You should become sons of the next world and not become sons of this world because on the Day of Judgement every son would cling to his mother. Today is the Day of action and there is no reckoning while tomorrow is the Day of reckoning but there would be no (opportunity for) action.” [Nahjul Balagha, Sermon 42]

“Beware! Surely this world is a place from which protection cannot be sought except while one is in it. The action which is performed only for this world cannot secure salvation. People are tested in it through calamities. Those who have taken worldly pleasures here will be taken out from them (by death) and will be questioned about them. And whatever (good actions) they have achieved for the other world, they will get them there and stay in them. For the intelligent this world is like the shade – one moment it is spread out and extended but soon it shrinks and contracts.” [Nahjul Balagha, Sermon 63]

12. Get Ready For The Journey

“Get ready for the journey, for you are being driven, and prepare yourselves for death, since it is hovering over you. Be a people who wake up when called, and who know that this world is not their abode, and so have it changed (with the next).” [Nahjul Balagha, Sermon 64]

13. Ride on the Path of Honour

“May Allah bless whoever listens to a point of wisdom and retains it, when he is invited to the right path he approaches it, he follows a leader (by catching his waist band) and finds salvation, keeps Allah before his eyes and fears his sins, performs actions sincerely and acts virtuously, earns treasure of heavenly rewards, avoids vice, aims at (good) objectives and reaps recompense, faces his desires and rejects (fake) hopes, makes endurance the means to his salvation and piety the provision for his death, rides on the path of honour and sticks to the highway of truth, makes good use of his time and hastens towards the end and takes with him the provision of (good) actions.” [Nahjul Balagha, Sermon 76]

14. Fortunate Is He Who Takes Lesson From Others

“O creatures of Allah! The best adviser for himself is he who is the most obedient to Allah, and the most deceiving for himself is he who is the most disobedient to Allah. Deceived is he who deceived his own self. Enviable is he whose Faith is safe. Fortunate is he who takes lesson from others, while unfortunate is he who fell victim to his desires. You should know that even the smallest hypocrisy is like believing in more than one God, and keeping company of people who follow their desires is the key to obliviousness from religion, and is the seat of Satan.” [Nahjul Balagha, Sermon 86]

15. Make Us Free From Stretching Hands to Anyone Other Than Thee

“And Allah knows whatever has been treasured by mother-of-pearls, and covered under the waves of oceans, all that which is concealed under the darkness of night and all that on which the light of day is shining, as well as all that on which sometimes darkness prevails and sometimes light shines, the trace of every footstep, the feel of every movement, the echo of every sound, the motion of every lip, the abode of every living being, the weight of every particle, the sobs of every sobbing heart, and whatever is there on the earth like fruits of trees or falling leaf, or the settling place of semen, or the congealing of blood or clot and the developing of life and embryo.

On all this He suffers no trouble, and no impediment hampers Him in the preservation of what he created nor any languor or grief hinders Him from the enforcement of commands and management of the creatures. His knowledge penetrates through them and they are within His counting. His justice extends to all of them and His bounty encompasses them despite their falling short of what is due to Him.

O My God! Here stands one who has singled Thee with Oneness that is Thy due and has not regarded any one deserving of these praises and eulogies except Thee. My want towards Thee is such that nothing except Thy generosity can cure its destitution, nor provide for its need except Thy obligation and Thy generosity. So do grant us in this place Thy will and make us free from stretching hands to anyone other than Thee.” [Nahjul Balagha, Sermon 91]