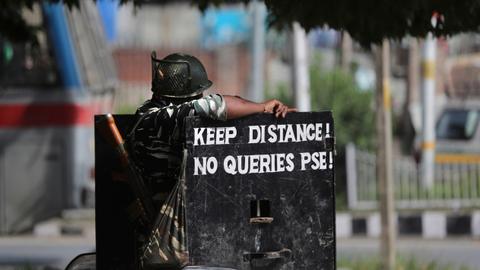 SRINAGAR —   Fardeen Malik, who works for a non-profit in India-administered Kashmir, desperately wants to socially distance himself from people as a preventative measure against the coronavirus infection. To begin with, he wants to work from home. But he can’t because the Indian state has denied the region the high-speed internet that could enable him to do so.

Malik told TRT World that most of his co-workers were complacent but that may change soon since the neighbouring Jammu region has three people who have tested as positive, and six cases have been reported from Ladakh with one from Kargil district.

“I wash my hands often. I avoid contact with my colleagues who call me a paranoid hypochondriac,” Malik said.

Although his organisation has permitted him to work from home, 2G speed makes it cumbersome—near impossible— to access or download documents and videos related to his work, the tasks he can accomplish only at the office, which has a broadband connection with relatively faster internet.

“I have to travel about 70 kilometres to and fro every day only to worry myself to death at office,” he said.

On August 5 last year, the Indian government stripped Jammu and Kashmir of its statehood and autonomy. Apprehending a revolt in a region where a highly popular insurgency had been raging for the past 30 decades, India deployed thousands of soldiers onto the streets and cut telecommunications and the internet as well as detaining about 10,000 people.

Over the past eight months, low-speed internet has been restored on both mobile phones and fixed-line phones. At the same time, the Indian government’s measures to firewall social media failed. Therefore, the government has reduced internet speed to limit the damage caused to its image in the world by a rebellious population’s dissenting messages online.

“Message to the world: In Kashmir, we are not able to watch any videos of advice from experts, doctors, scientists or media regarding Covid-19. We still do not have high-speed internet. Please talk about it. We are still struggling with 2G internet on our mobile phones,” tweeted Rifat Mohidin, a journalist based in the capital Srinagar.

A reporter who works with one of Kashmir’s largest media organisations said he still visits a government facility that was, until the restoration of the internet on cell phones in January, the only place where journalists could access the internet.

“This corona threat is getting scarier by the day. I want to work from home. But reporting is not sending emails only. While researching a story you sometimes need to watch videos or download data-heavy files. 2G speed doesn’t permit you to do that,” he said, requesting anonymity.

For the majority of office workers — there are more than 200,000 government employees in the Kashmir province that has a population of more than six million— working from home is not even an option.

Muhammad Hanif, who works with the region’s largest bank, Jammu and Kashmir Bank, said the management has been vacillating on allowing those employees to work from home who do not deal with customers directly.

“But even if they let people work from home you cannot because of low speed,” he said.

Government spokesman Rohit Kansal did not answer TRT World’s calls, or responded to an SMS, although he has been advocating social distancing in several of his tweets.

In fact, while the demand for high-speed internet was growing shriller, the government issued a statement saying the speed will stay low till March 26 unless a review orders otherwise.

Reacting to the fresh government order, Muzamil Amin, a student said: “While the world prays for an anti-corona vaccine, Kashmiris have been left to demand high-speed internet. This is what oppression does.”

Dozens of businesses that depended heavily on the internet have folded and hundreds of people have lost jobs since the communications lockdown was imposed.

The Private Schools Association of Jammu and Kashmir, encompassing nearly all private schools in the region, on Saturday said the ban on high-speed internet amounted to denying Kashmiri students the right to education.

All educational institutions have been closed in Kashmir, but about 1.5 million students do not have access to online learning facilities.

“Schools have been closed in many countries but students there get to educate themselves via online classes or tools but Kashmir is the only place where the government ensures that there is a ban on offline as well as online education,” a statement issued by the association reads.