Shafaqna Pakistan:While everybody knows that India has a great obsession with Pakistan, it has now been claimed by the Indian government that “Islamabad used about 200 Twitter handles to provoke Indian Muslims and spark discontent against the police during and after the communal riots in Delhi”.

A report in this regard has been compiled by the Indian security agencies. The concerned dossier claims “detailed investigations conducted by Indian agencies” reveal Pakistani deep state was working for creating major communal disturbance in India.

The dossier cites ‘detailed investigations’ conducted by Indian agencies to add that these handles were created at the behest of the Pakistani deep state with the purpose of creating major communal disturbance in India. As if were the Modi Sarkar and Indian police not enough, Pakistani deep state was blamed for spreading inflammatory messages and all rioters were going through Twitter before burning mosques, houses and shops and killing Muslims. In all, 53 people were killed and 500 injured.

But Pakistan is not alone in this regard. Says a major Indian newspaper, “Indian security agencies have red-flagged an Indonesia-based non-government organisation (NGO) for raising funds on cyberspace in the name of the Delhi riots. The money was to be ostensibly sent to Muslims who either lost their family members, were injured or lost their property in the February 24-25 riots that left 53 people dead and more than 500 injured.”

It says the funds were being collected using the Delhi riots as the excuse and using images and messages on the Internet as propaganda tools and being routed to India from Dubai through the hawala route.

Indian Home minister Amit Shah believes that money had been funnelled abroad to instigate the Delhi riots and said five people were arrested for allegedly distributing money before the violence. Good, the Delhi police and BJP goons are blameless and it were the outsiders who were creating troubles.

Meanwhile, the top Indian communal terrorist organization Rashtriya Swayamsevak Sangh (RSS) has blamed “a section of leaders for misleading the masses” during the India-wide protests against the Citizenship Amendment Act (CAA). It says the Centre must speak to states to clear their doubts over the CAA, the National Population Register (NPR) and the National Register of Citizens (NRC) as they are in national interest. The statement came on the day when the Telangana assembly passed a resolution opposing the CAA, NPR, and NRC. Earlier, seven other Indian state assemblies have passed similar resolutions.

The world, besides most Indians, sees NPR as highly discriminatory and unconstitutional as it leaves out the Muslims and links faith to citizenship in a secular country. It could result in expulsion or detentions of Muslims unable to provide the documentation if the law is seen in the context of a proposed pan-India NRC. The NPR, claimed to be a comprehensive biometric database of all “usual residents” in India, is linked to the NRC aimed at identifying undocumented immigrants. Modi Sarkar has in the past described the NPR as the first step towards a nationwide NRC. Now, it maintains that there is no link between the two, and that an all-India NRC is not on the anvil anytime soon. But the RSS has called the CAA as the nation’s “moral and constitutional obligation” and congratulated Parliament and the government for bringing the legislation. In a separate resolution, it welcomed the nullification of Article 370 and the decision to “reorganize” Jammu & Kashmir into two Union Territories terming it bold and historic decision. It has also referred the construction of Ram temple in Ayodhya as a symbol of “national pride”.

Vivek Katju, a former Indian diplomat, has politely admitted in a write-up: “Now, as there are questions in important sections of global opinion about the domestic direction of the country, India’s political leaders and diplomats have to refute, clarify and explain. This is, of course, part of the diplomatic process but it expends diplomatic capital and takes some international attention away from issues, that India would like to remain in focus…. However, the (CAA) Act, by itself, and due to the alarm it has caused among large sections of Indian Muslims as a supposed precursor to a National Register of Citizens exercise perceived as harming their interests, has raised a degree of international disquiet that India is moving away from its secular moorings. This has compelled Indian diplomats to refute allegations regarding a dilution of India’s constitutional commitments.”

Walter K Andersen, a political scientist and author of two critically-acclaimed books on the RSS, says: “With an economy declining at home and internationally, cultural-nationalist issues such as a Ram temple might at least in part represent an effort to divert attention from economic stress. Polling data, however, suggests that such cultural-nationalist issues have much less influence on local and state elections than on national parliamentary contests. Recent elections in Delhi (where the Aam Aadmi Party won a large majority), for example, indicate that policy regarding roads, schools and water shaped the popular outcome.”

He warned in a comment: “The long-range social impact of the surge of recent Hindutva initiatives is still unclear. If they result in increased social instability, the prospects for economic investment are likely to decrease, a development that could have negative political implications for the BJP and diminish India’s attractiveness as a strategic partner for the US and other countries concerned by the rise of an assertive China. One indication of this potential is the rioting that suddenly broke out in northeastern Delhi (apparently triggered by public intemperate remarks of a failed politician regarding the citizenship issue) during the visit of President Donald Trump to India — and thus attracted international attention. This may be the time for the government to consider how Hindutva initiatives impact the country’s social fabric.” 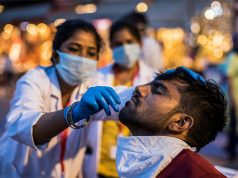