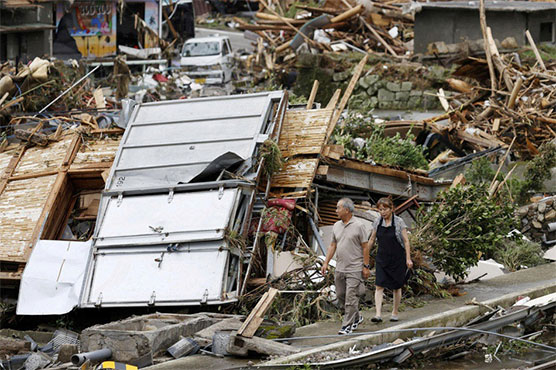 KUMAMOTO (AFP) – Torrential rain hampered the efforts of tens of thousands of rescue workers in southwestern Japan Monday as they hunted for survivors from deadly floods and landslides, with more downpours forecast.

Around 50 people were feared dead after heavy rain lashed areas of western Japan from early Saturday, causing rivers to burst their banks and flood low-lying regions.

Prime Minister Shinzo Abe warned the weather front was heading across the country, predicting “heavy rain over a wide area” and urging people to “take action to protect their lives.”

In the worst-affected region of Kumamoto, bad weather was preventing some rescue efforts, local officials said, with at least 13 people still unaccounted for.

“Because of the heavy rain, we were forced to cancel some emergency flights of helicopters over the disaster zone,” local disaster management official Tsubasa Miyamoto told AFP.

The floods washed away roads and bridges, cutting off many isolated communities.

A local firefighter in the western region of Kagoshima told AFP they used boats to rescue 11 people, but conditions were making it hard to reach others.

“Calls came from people telling us that they wanted to flee their home but they could not do it on their own,” he said.

“Some roads are submerged and you cannot drive through them.”

In one of the hardest-hit areas, residents wrote out the words “rice, water, SOS” on the ground, while others waved towels and called for rescue and relief goods.

At a nursing home for the elderly, 14 people were confirmed dead late Monday, officials said, after water from a nearby river inundated the ground floor, leaving those in wheelchairs unable to reach higher ground.

Emergency services, aided by locals, managed to rescue around 50 residents and staff from the facility using rafts and inflatable boats.

Heavy rain is expected to continue through Tuesday afternoon, and the Japan Meteorological Agency issued a non-compulsory evacuation order for around half a million people in southwestern Japan.

“It s such a mess,” resident Hirotoshi Nishi told public broadcaster NHK as he swept debris from his mud-strewn front room.

“Many pieces of wood came into my house. I don t know what to do.”

Evacuation efforts are also hampered by fears of spreading the coronavirus that has killed almost 1,000 people in Japan, out of close to 20,000 cases.

Partitions have been set up at evacuation centres to keep safe distances between families, and evacuees are made to wash their hands frequently, sanitise and wear face masks.

As night fell, a JMA official told reporters: “In some cases, it can be more dangerous to go to shelters (than to stay at home).”

“We ask people to assess their situations, especially when it gets dark outside,” he added, referring to the regions of Fukuoka, Nagasaki and Saga.

For some local business owners already battered by the coronavirus crisis, the natural disaster has compounded their problems.

Yuji Hashimoto, who runs a tourism bureau in the hot-spring resort in Yatsushiro, one of the flood-hit cities in Kumamoto, told AFP that the “beautiful tourism spot dramatically changed overnight”.

“The damage was beyond our imagination. It s literally a bolt from the blue… The disaster is a double-whammy as our hot spring resort was struggling to weather the impact of coronavirus. We don t know what will happen to us next,” he said.

Government spokesman Yoshihide Suga told reporters that 19 people were confirmed dead from the floods while another six were in a state of “cardio-respiratory arrest” — a term often used in Japan before a doctor officially certifies death.

Suga said officials were investigating another 24 deaths to confirm a direct link to the floods.

He said more than 40,000 personnel from police and fire departments, the coast guard and self-defence units were conducting search and rescue operations throughout the night.

Japan is in the middle of its annual rainy season, which frequently unleashes deadly floods and landslides.

Climate change is also playing a role because a warmer atmosphere holds more water, increasing the risk and intensity of flooding from extreme rainfall.

In 2018, more than 200 people died in devastating floods in the same region of Japan.